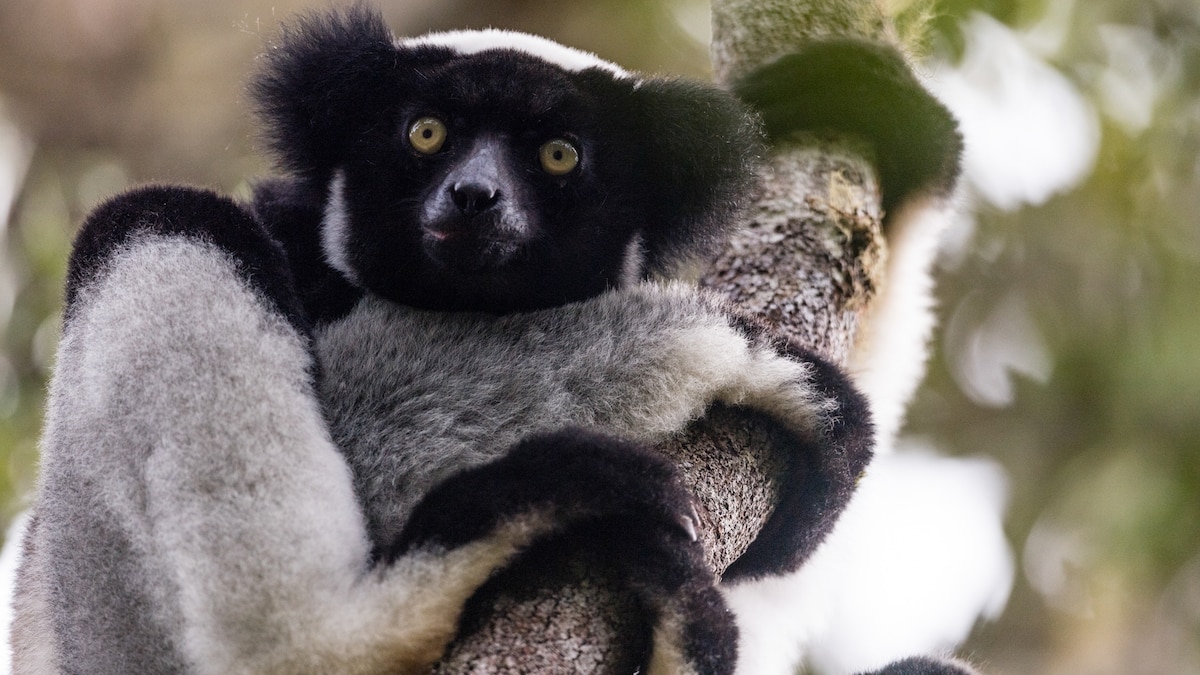 For twelve years, Chiara De Gregorio and her colleagues woke up before dawn and traveled to the rainforests of Madagascar to observe a critically endangered primate known as the indri, or song lemur. They battled torrential rains, blood-sucking leeches, and uncooperative lemurs, but in the end, scientists were rewarded with a startling discovery.

After analyzing hundreds of primate songs, scientists found that indris sang using a kind of rhythm that only humans and birds used to use. This is the first time that a mammal outside of humans has used these rhythms, which are defined as having a defined amount of time between notes.

Listen to a female Indri, with her one-year-old daughter, singing with a male, who is out of the frame.

“The Indris are the only lemurs who communicate with songs,” says De Gregorio, primatologist at the University of Turin, Italy, and lead author of a new study on indri rhythms, published today in Current biology.

In this case, De Gregorio refers to the tendency of animals to harmonize in duets and even choirs of more than two animals. The animals sing to find lost family members, claim plots of forest and even carry out “voice battles” with their neighbors, De Gregorio explains in an email.

Of course, to the human ear it all looks like a toddler with an air horn. But in these squeaks and horns, there are overlapping note patterns and durations with qualities found in human music.

The find is all the more interesting because, although we are both primates, the last time humans and indris shared a common ancestor, there were still dinosaurs roaming the earth.

Learning that people and indris share this form of rhythm “pays for all the days spent shivering in the rain, waiting for the animals to sing,” says De Gregorio.

Indris will rock you

To better understand why indri songs are special, you need to know a little more about the building blocks of music.

In 2015, a team of scientists analyzed more than 300 human-made music pieces recorded around the world. Across continents and cultures, certain similarities have emerged over and over again. Scientists have discovered more than a dozen characteristics common to music, including the use of particular pitches and the repetition of phrases.

Unsurprisingly, eight of the characteristics scientists captured had to do with rhythm. Specifically, music tends to rely on two-beat structures, also known as categorical rhythms. In these patterns, the notes can be the same length, creating a 1: 1 ratio like the clicks of a metronome, or a 1: 2 ratio where some notes are twice as long as others.

To imagine a 1: 2 pattern, think of Queen’s “We Will Rock You,” says Andrea Ravignani, study co-author and biomusicologist at the Max Planck Institute for Psycholinguistics in the Netherlands. The short-short-long pattern of stomping and clapping in this song is an epic example of the 1: 2 ratio.

It was recently shown that a bird called the nightingale thrush sang in a 1: 2 ratio, but its preference was 1: 1. Now Ravignani says the evidence is even stronger that indris use 1: 2 regularly, much more often than birds.

Oddly enough, lemurs also sometimes ended their songs with a flourish known as ritardando in classical music. This is when you decrease the tempo or drag the last notes of the song.

“Again, this is not a very common characteristic,” says Ravignani. Most animals “follow a pattern or don’t”. The fact that lemurs swap him suggests impressive flexibility, he says.

The discovery is all the more urgent given the fate of indris and other lemurs. Threatened by hunting and habitat loss, experts say there are only a thousand to 10,000 animals left in the wild. (Listen to the music of Nat Geo Explorer Ben Mirin created from the vocalizations of golden bamboo lemurs and beatbox music.)

“We are very concerned about the situation of Indris, which is very critical,” said De Gregorio. “They can’t survive in captivity, so once the forest is gone, they’re gone too.”

Could whales be next?

While it’s surprising that indris and thrushes possess certain components of music that were previously thought to be unique to humans, the finding also raises the question of whether other song animals, such as whales, use these rhythms. (Look at this graphic which decodes whale songs.)

“To my knowledge, research like ours has never been done on cetaceans, such as whales and dolphins,” says Ravignani. “I think this type of research, where we’re looking for the building blocks of music in other animals, is still in its infancy.”

For all the research that has been done on birdsong, for example, the rhythms of birds were largely ignored until recently, says biologist Ofer Chernicovsky of Hunter College, New York. In 2020, his team published the study on nightingale thrushes.

“We only recently discovered this in birds, and now this article is the first to find it in mammals,” said Chernicovsky, who was not involved in the new study. “My feeling is that the more people look, the more people find it. “

For humans, the love of music is almost universal. It can make us happy, sad, or romantic. It can make us dance, cry, or even fight. And yet, explaining what music is or why it pulls so powerfully on human emotions is incredibly difficult.

At some level, these rhythms do the same thing in animals, Chernicovsky explains. Whether it’s mating, competition, or kinship, the creator of every sound tries to influence his listeners.

“Music is really a kind of magic,” Chernicovsky says. “It doesn’t make sense. And yet, we love it, we engage in it, and it gives meaning to our lives.

James Michael Tyler, who played Gunther in “Friends,” has died

JoJo announces dates for his 2022 tour