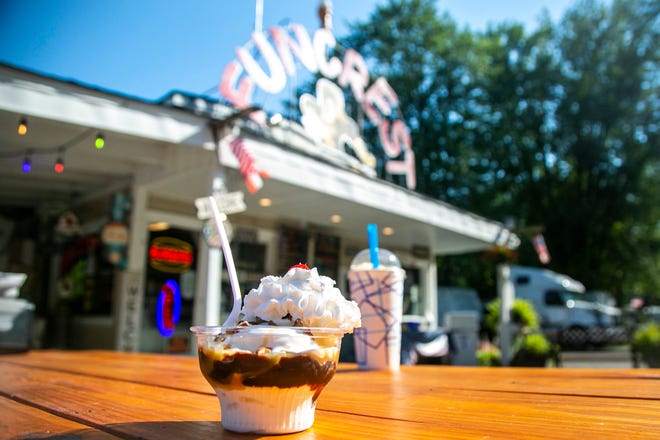 To celebrate this special day, Press-Citizen reporters visited these five Johnson County ice cream parlors and tried the most unique and interesting flavor on the menu.

Here’s what we found.

Funcrest is your one stop before or after any trip near Coralville Lake.

If you need a new fishing bobber, gear for a game of disc golf, or craving some delicious fries and a root beer float, the Funcrest Resort has a great variety.

For example: I had a turtle sundae made with vanilla ice cream, chocolate and caramel sauce with pecans, whipped cream and a cherry.

Sturdy picnic tables provide plenty of seating in the shade of the roof attached to the dairy and grill, unless you prefer to opt for a place in the warm afternoon sun to complete the treat that you ordered.

Large, colorful bulbs on fairy lights dot the ceiling above the seating area between speakers with loud choruses of soul quartets as well as funk and rock artists from the 1950s, 60s and 70s.

Its revamped menu features offerings with tenderloins, burgers, chicken sandwiches, hot dogs, a kids’ menu and other daily specials. Shakes, malts and soft ice creams are all part of the “fun” that has made Funcrest a favorite for Johnson County families for generations.

Upon arriving at Dane’s Dairy on Tuesday night, I immediately felt an inexplicable kind of regressive FOMO that I, in two years of living in Iowa City, had never before encountered this hidden local gem at 1430 Willow Creek Court. Its vibe immediately reassured me that it would satisfy my bi-weekly cravings for coverage of school board meetings (usually satisfied with popcorn). Not that I was worried.

My specific task was not to ogle the historic establishment itself, but to assess the quality of its ice cream. Specifically, I was tasked with researching Dane’s “most unique flavor”. I quickly concluded that it offered few options that would fit that description – although I wouldn’t consider that a negative. His menu touches on all the must-haves that could possibly satisfy my taste buds on a summer night; standards like Oreo, strawberry or vanilla-chocolate-swirl.

I almost chose a sundae with Oreo crumbles and gummy worms (another classic) before settling on a small cup of coffee yogurt. I remembered that I had just been on vacation consuming an indescribable amount of unhealthy goodies and committed to eating mostly salad this week.

After:Here are 5 things to do this weekend in Johnson County, including a farewell concert at Gabe’s

I’ll be blunt and say my selection had nothing to do with yogurt and absolutely nothing to do with coffee. My best comparison is to say it tastes like McDonald’s Vanilla Soft Serve, if not a bit creamier and more luxurious. It’s a shade of light brown, just coffee enough to be palatable. It cost $2.50 – too little to be worth filing an expense report with Gannett (as I was looking forward to). As a bonus, the little plastic cup was handed to me through the drive-thru window by a boy who couldn’t have been more than 16. I smiled thinking of him and his co-workers enjoying the freedom and stomach aches I can only assume will come from spending the summer behind the handle of a soft-serve machine.

My review should not be taken as a criticism. It’s the contrary. Dane’s coffee yogurt, which is actually a vanilla soft serve, is a reminder that all ice cream is good ice cream. Those of us who revere its power are not inclined to criticize the exact notes of any flavor we taste; we savor everything we get.

Dairy Queen isn’t unique when it comes to ice cream shops, and it’s certainly not an Iowa City specialty. But the Dairy Queen on Riverside Drive has something special, in fact several things that always seem to draw a crowd on a balmy summer evening.

Located at 526 S. Riverside Drive in Iowa City, this Dairy Queen runs along the banks of the Iowa River and is inspired by the traditional outdoor ice cream shop, with outdoor seating and easy access to the riverside trail Iowa.

When it gets dark enough just before sunset, the neon signs light up the grounds and give a retro feel or vibe to the ice cream eating experience.

Equipped with a typical menu of sweets found at Dairy Queen — but not fast food as a sign near the cash register indicates — this Dairy Queen also has a “secret menu” displayed in the window just side of the box. This secret menu is filled with several Dairy Queen’s Blizzard soft serve ice cream concoctions with a combination of flavors, each named after the employees of the place.

I chose the “Paul” rather than going with a normal menu item. This Blizzard has a vanilla base with cookie dough, caramel, and something called “crunch coat”, which seemed like a mix of nuts and sprinkles.

This Dairy Queen did not disappoint and far exceeded any other experience I’ve had at other places in the chain. While I’m not sure if Paul was working Wednesday night, I give him a big “thank you” for providing such a tasty and unique treat.

An Iowa City staple since 1989, Heyn’s Ice Cream offers more than 40 flavors of soft serve creams, sorbets and frozen yogurts that make it a hot spot during the summer.

However, it seems that ‘Monster Mash’ ice cream is its signature flavor. It’s a mix of vanilla ice cream, M&M’s, peanut butter, and cookie dough.

Although I found the peanut butter to sometimes overpower the other ingredients, it was still a nice treat to beat the heat with.

If you drive down Marengo Road in Tiffin, you may pass an unassuming pastel yellow two-story building with a wrap-around porch.

You’ll want to park in the parking lot, because that’s where Jon’s Ice Cream Store & Restaurant is, opened in 1980 by owner John Schneider, according to the Gazette.

Located at 231 W. Marengo Road, Jon’s Ice Cream Store has an old-fashioned feel, perhaps because you can reach up to a window to order your dairy treats or perhaps because of the menu itself.

After all, July’s “superwhipper” is Rhubarb Cherry Crisp, a homemade rhubarb cherry crisp mixed with vanilla ice cream and definitely something hard to find in the modern world of green tea or ice cream. espresso flavored ice cream.

Tempting as it may seem, I chose a more permanent flavor on the menu: Eskimo Kisses.

Coconut ice cream with chunks of gooey chocolate, the ice cream was reminiscent of a cold Mounds chocolate bar.

Delicious, but three bites, it reminded me that while I like coconut, I don’t like it that much. So you have been warned.