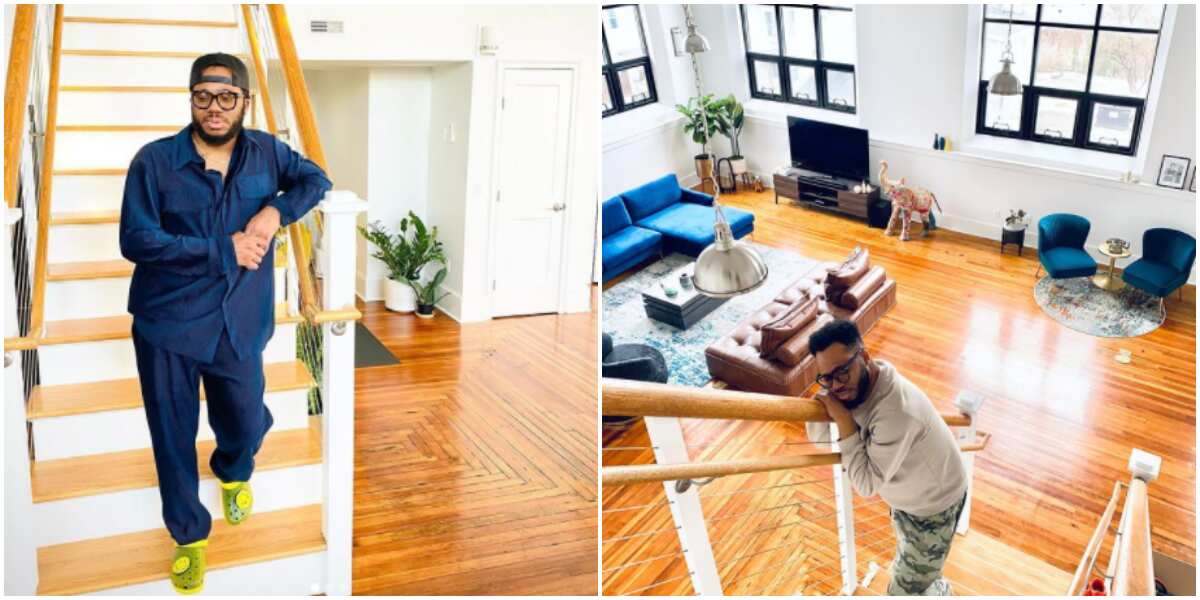 Singer Lamboginny shares eye-catching photo of his new home in the US and recounts days of struggle in Ikotun, Igando

Bad times don’t last forever and that’s exactly what US-based Nigerian singer, Lamboginny made it clear to many in a post shared on his Instagram page.

The entertainer was spotted posing in his recently purchased home and he had a few words to share in the caption.

Lamboginny said he lived in a mud house in Igando before his family moved to a “face me, I face you” house in the Ikotun neighborhood of Lagos.

Nigerian Man Walks into Shoprite in Lagos, Suddenly Screams and Gets People’s Attention in Viral Video

He also mentioned that he had to squat at a friend’s house for seven years before he could finally afford a one-room apartment.

Do you have a breakthrough story that you would like us to publish? Please contact us via [email protected]!

“I grew up in a mudhouse with my grandparents in Igando, Lagos. We then moved to a ‘face me, face you’ house in Ikotun. I squatted with friends for 7 years and I I then got a one-bedroom studio apartment because I was so broke and couldn’t afford to move around.”

In another part of the post, Lamboginny noted that he walked through most of life’s challenges with a smile on his face. According to him, he was inspired to share the post after waking up feeling grateful for how far he has come in life.

“A toast to more progress.”

“Life isn’t a race bro, it’s a journey to be savored step by step. I’m super proud of you.”

“You have been resilient. God is with you my brother. I love you very much.”

“This loft is everything and you deserve this beautiful home shared with your gorgeous wife and more. Bless aburo mi”

“My next event will be in your living room. Cheers, distinguished.”

“And in the midst of it all, this man was always putting a roof over the heads of strangers, making sure people he barely knew would walk out of hospitals debt free, innocent people released from prison!!! A TRUE HERO !!”

During this time, Legit.ng previously reported that Atiku’s daughter Nana went the extra mile to celebrate Nollywood’s Zubby Michael who ushered in a new era.

Nana gave the artist a piece of land in Abuja as a birthday present and she also dedicated an Instagram post to him.

A grateful Zubby shared the news with his fans and followers on social media, with many praising him in the comments section.

In Their Own Words: Why Artists Are Leaving Spotify