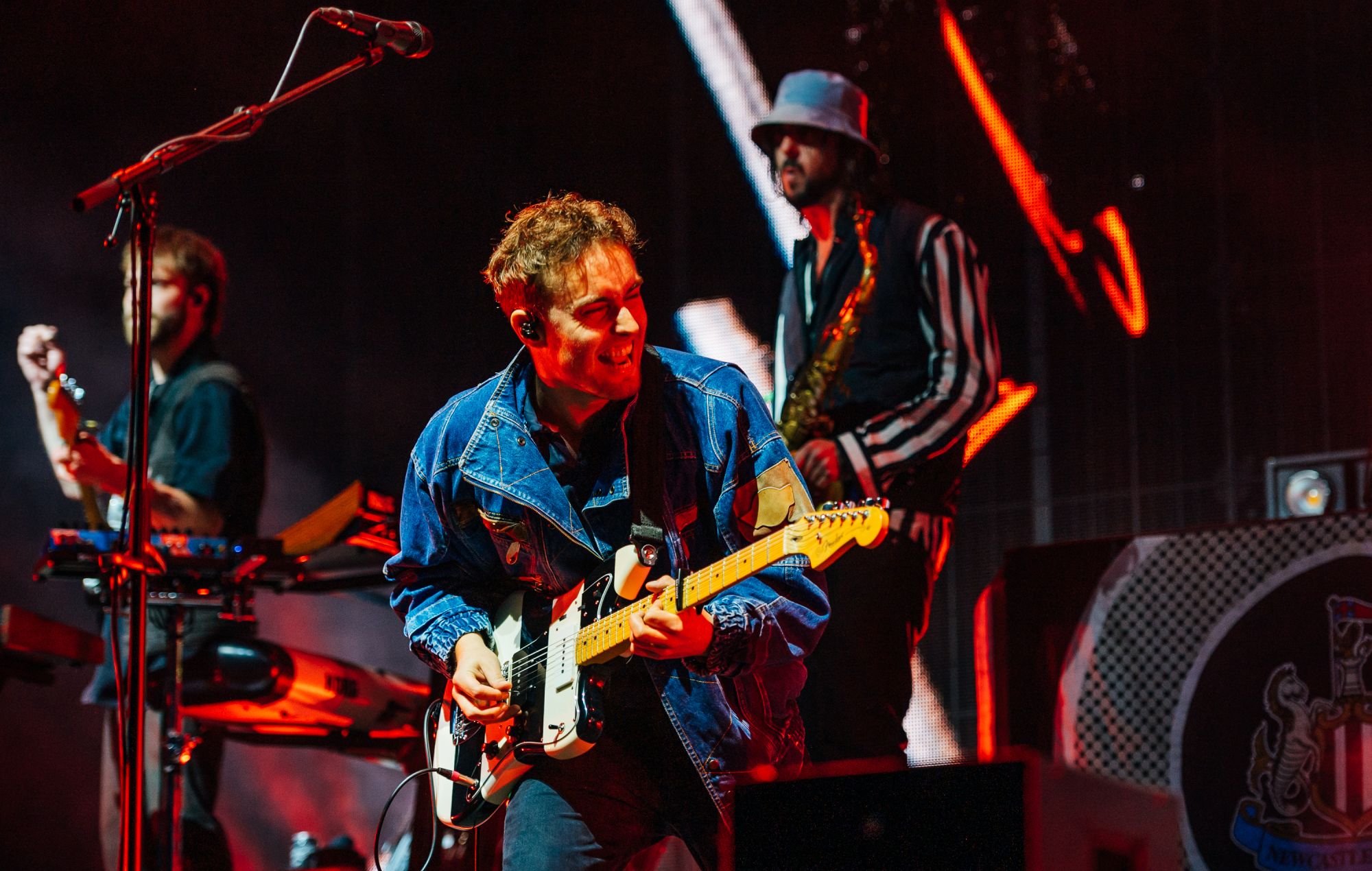 This year’s Truck organizers clearly wanted the Oxfordshire festival to come back strong. A three-year delay due to COVID meant expectations were high, not to mention the festival is celebrating its 25th anniversary this year.

The line-up was certainly one of the strongest ever, with indie stalwarts Bombay Bicycle Club, man-of-the-moment Sam Fender and rabble rockers Kasabian headlining. Elsewhere, rising acts including Baby Queen and Yard Act planted their flags as future stars sought higher placements on the bill. Much like Community Festival the week before, it was essentially an indie paradise for the 25,000 fans gathered at Hill Farm.

Perhaps that’s why Yard Act seems so disgusted to only play a 30-minute set on Friday before rushing to play another festival. “We would have played for four hours,” frontman James Smith told the crowd, “and played on the main stage, but that spot was already taken.” He can clearly see the fans’ delight as they mosh on “Payday” and “The Overload,” wrapped up in the songs’ jolts, ramshackle guitars, and acerbic vocals.

Later, Sigrid delivers a polished and emotional pop masterclass on the main stage. “I just had a moment… I love my job,” the Norwegian star told the crowd after a glorious performance of “Sucker Punch.” Rightly, the heavens open for “strangers” (“Like in the movies / It’s starting to rain”). Fans don’t seem to mind the drizzle, with dozens of people climbing onto each other’s shoulders to dance to its catchy synth-pop. It’s a joy to see Sigrid in her element, so impressed with the crowd connection. “I’m a little speechless,” she says before a hard-hitting performance of her breakthrough “Don’t Kill My Vibe.”

Friday headliners Bombay Bicycle Club are also excited to play Truck. Vocalist and guitarist Jack Steadman says they “have a lot of fun” on several occasions as the band reinterprets songs old and new. Oddly enough, despite the rather lukewarm reception of their latest album, 2020’s “Everything Else Has Gone Wrong,” fans seem as enamored with the new material as tracks such as “Dust On The Ground” and “Lights Out, Words Gone.” . The title track from their latest album has a lot more live pep on what otherwise sounded like a lackluster album.

“It’s truck party, isn’t it? I want to see mosh pits,” guitarist Jamie MacColl shouts ahead of “Evening/Morning.” Closer ‘Always Like This’ is awesome but the penultimate song ‘Carry Me’ with its explosive electro beats and brass fanfare would have been closer.

The next day, Baby Queen – real name Bella Latham – rushes to the main stage with boundless energy that never falters. “Nobody Really Cares” is Latham’s pop-punk ode to giving a fuck and is a surefire crowd pleaser, with fans uniting to shout the line: “Tell your boyfriend it’s over / Write a song for Jodie Comer.” Later, Sports Team put on a confident performance: “M5” proves that when they sing in harmony, they inject a much-needed polished melody into their loud indie rock.

Kelis marks a change of gear at the festival when she treats fans to a medley of her classics as well as a medley of DJ covers. The sonic contrast between the previous guitar numbers and this big party of electronic dance is welcome, reflected no less by one of the liveliest crowds of the weekend. “Millionaire,” “Trick Me,” and “Milkshake” sound amazing, with Kelis’ soulful vocals on point. Mixes of Crystal Waters’ ‘Gypsy Woman’, Donna Summer’s ‘I Feel Love’ and Nirvana’s ‘Smells Like Teen Spirit’ are just a few of the star gold bangers deployed on set.

The Kooks bring a nostalgia fest later to the main stage. “Shine On”, “She Moves In Her Own Way” and “Ooh La” remind you how many infectious songs they have. Singer Luke Pritchard is more melodious and playful with his voice than ever. Judging the crowd’s mood, he said, “Don’t worry, we’ll be playing ‘Naive’ tonight,” later ripping into the 2000s song that started the band it all.

There’s palpable excitement for the Sam Fender title and it’s not just looking at the amount of fan t-shirts spotted on the site; snippets of overheard conversations reveal how buzzed people are. And so it’s kind of disappointing to see a set plagued by ratings loss, not just because of the obvious concern, but also to hear Fender say they’ll have to modify the set to be “More relaxed”. “I don’t want other people to be wiped out anymore,” Fender says after a five-minute delay after “Spice.”

He also seems slightly off tonight – not vocally but energetically – and reveals he’s been battling a terrible sore throat. “You have kindled something though,” he tells the crowd after a huge chant with ‘Saturday’, confirming their commitment is enough to sustain him for the rest of the set. A surprise appearance from Shaun Williamson – Barry de esters – singing ‘Getting Started’ gives this festival allure, in the middle of a summer of non-stop concerts, its unique side.

On Sunday, Jade Bird, like Yard Act, is excited to play and laments not being able to play any longer. The beating sun suits his Americana-inspired songs, with “I Get No Joy” and “Going Gone” stirring mini moshpits. Inhaler will later impress with its pitch-perfect harmonies and catchy rock songs that will curl right into your brain, including “My Honest Face.”

It’s interesting to see if Sam Ryder’s crowd has just come to see him perform his Eurovision hit ‘Space Man’, but halfway through his set it’s clear there are some real fans in the audience who reel off the lyrics to his other tracks. . Ryder is a natural performer, drawing inspiration from Freddie Mercury’s “eh-ohs” for dynamic calls and responses. His vocals are sublime – regularly incorporating “Truck Fest” shouts – as is his shredding on guitar.

Easy Life draws one of the biggest weekend crowds and wants to remember it. Frontman Murray Matravers tells fans, cheering on the most “legendarily tall” moshpit seen at one of the band’s Leicester gigs to date. Fan duly obliged, and “Skeletons” and “Nightmares” become a storm as Matravers decides to crowdsurf (and crowdwalk!) while singing them. A real party.

Leicester are put more on the map on Sunday with an explosive title set by the Kasabian natives. Following the departure of vocalist Tom Meighan in 2020, it feels like there’s enormous pressure on guitarist/vocalist Sergio Pizzorno to fill his boots, but he commands the stage with ease, embracing much the swagger and growl of his former bandmate.

Kasabian has since hired additional backing musicians and the results are fantastic: stadium rock anthems performed with gusto and vigour. “You’re In Love With A Psycho” and the glam-rock stomp of “Empire” are thrilling live, with Pizzorno climbing the stage infrastructure to better connect with fans. “That was the best fucking concert of the summer…it’s absolutely insane. That’s why we join a band”, he says, before launching into “LSF” and “Fire”. A gigantic fireworks display closes the festive show, which also looks like a nod to the 25th anniversary of the festival.

The truck might be a basic affair, but its pure focus on music in a festival market that can feel over-commercialized and gimmicky is refreshing. More varied programming by genre is encouraged for future editions. For indie heads, however, it’s resplendent nirvana.

Chris Stapleton review: At Wrigley Field, the singer-songwriter brings the thunder, even if Mother Nature doesn’t