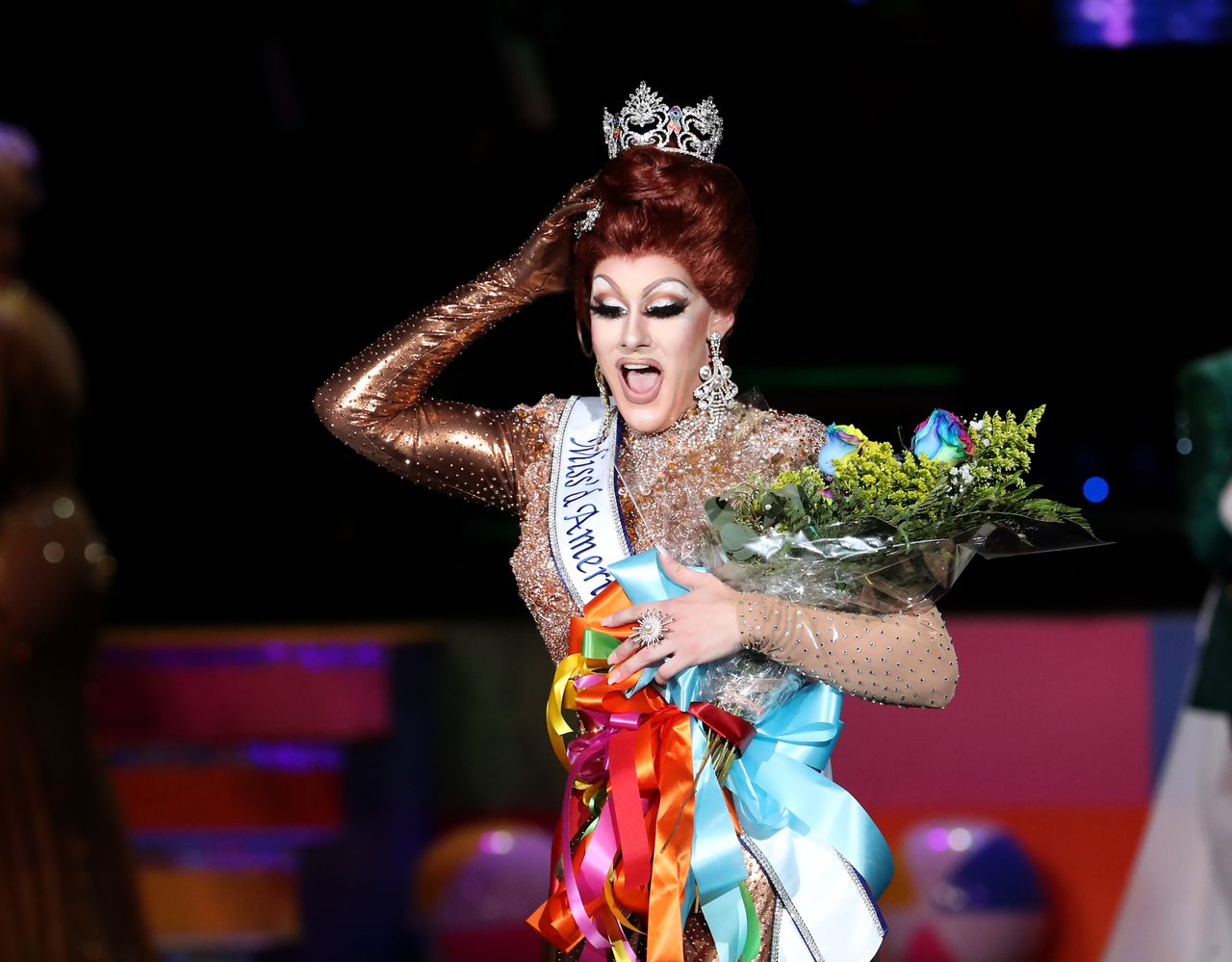 The Miss’d America pageant returned to the Hard Rock Hotel and Casino Atlantic City on Saturday night to crown a new runway queen for 2023. After being named the first runner-up in the 2022 Miss’d America pageant, Miss Elaine has vowed to return this year with a vengeance – and she did, beating seven other contestants to win the top prize.

The Miss’d America pageant – “the one with the D” – is a pageant for drag queens and has raised approximately $500,000 over 31 years for the LGBTQ+ community in South Jersey, Philadelphia and nationwide.

Miss Elaine, née Scott McMaster, from Pennsylvania, performed a 60s-themed dance routine as her talent – but perhaps her real talent was shown in her evening attire, a copper-dotted dress sequins and rhinestones, which she made herself.

In addition to the talent and evening wear, the contestants also strutted down the runway in creative swimsuits and answered an interview question.

Miss Elaine’s interview question was partly a sort of pop quiz, asking the year the Stonewall riots happened, as well as what she thought was the most important thing to come out of that period of the story.

After correctly answering that the Stonewall Riots began in 1969 — to thunderous applause from the near-full Sound Waves Theater as well as emcee Carson Kressley of “Queer Eye for the Straight Guy” fame — she went on to explain that it was “really the beginning of the modern gay rights movement here in America.

‘Without Stonewall, we wouldn’t have events like this in front of us today,’ said Miss Elaine.

Miss Venus Mystique, from Philadelphia, was named first runner-up, dancing through the talent section with an alien and space-themed routine, and wearing a form-fitting white party dress with sequins and feathers.

Miss Maria TopCatt (Anthony Mauriello), currently from Philadelphia but born and raised in South Jersey, was named second runner-up, winning the honor with her dance routine, which she performed to a medley of music including “Rhythm is Going to Get You”. ” by Gloria Estefan and Miami Sound Machine.

Miss Tiffany Foxxx (Gerald Posey), of Trenton, drew cheers from the crowd with her tribute to black women in history, in which black and white images of many women such as Rosa Parks and Katherine Johnson crossed the screen as she herself danced to the song ‘Stand Up’ from the movie ‘Harriet’, dressed as Harriet Tubman.

Another crowd favorite was Miss Sophya Medina (Velsanel Veguilla Navarro), who was born and raised in Caguas, Puerto Rico, and currently lives in New York City, with her energetic Studio 54-themed dance performance.

Miss’d America 2022 Amanda Porq opened the show with a Jersey Shore/beach themed dance routine and performed one last dance with a sunset backdrop before crowning Miss Elaine as the new queen.

Contestants and dancers arrived in Atlantic City on Friday for the Saturday night competition — with just one day to rehearse for the show, which was written and directed by Mark Dahl.

For more pictures, click on the Miss’d America 2023 Photo Gallery above.

Our journalism needs your support. Please subscribe today to NJ.com.