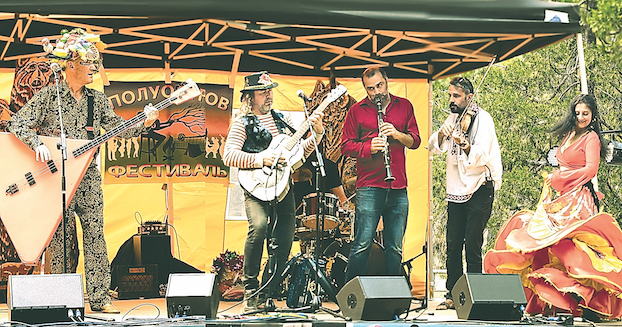 The Flying Balalaika Brothers are a unique blend of gypsy folk and electric rock n’ roll. Find them on April 23 at the Tritico theater.

By Mary Richardson | Special for the American press

Due to severe damage to Bulber Auditorium and other Banners rooms, the series has been slow to get organized this year, according to Banners director Dr. Brook Hanemann. Permission to use Bulber was only granted last week. As a result, some of the events are still “TBA” for the location. Updates will be available on the website and also on Facebook, or by calling the Banner Series office at 337-475-5123.

You are invited to the opening reception for this exhibit, which aims to educate disabled and disabled citizens in our community using art as an expression of humanity. The exhibit includes clay self-portraits made by clients of the Southwest Louisiana Independence Center (SLIC) and sculptures made of various types of durable medical equipment by area high school art students. The reception will feature a live performance by community members sharing first-hand experience of people with disabilities, and music by the Barbe High School Show Choir. The exhibition itself runs throughout the month of March.

The Members Reception will be held March 4 at 7 p.m. at the Legacy Center on campus. You can purchase a membership in advance online, mail the membership form prior to attendance, or purchase a membership on the evening. Come to the newly opened venue for an evening of refreshments and music by Ken Waldman on the 3rd level.

It’s a string quartet yes… but electrified! As the world’s only string rock band, Violectric illuminates the stage and the audience’s senses through the use of cutting-edge technology and interactive experiences. Their repertoire spans the history of rock ‘n’ roll and every song is played live with no backing tracks. From The Beatles to Ozzy Osbourne, Maroon 5 to SIA, their performances consist of exclusive arrangements you won’t hear anywhere else. Reception to follow.

Joseph Campbell was a mythologist who explored our religions in relation to mythologies. Deepak Chopra, Mick Fleetwood, Rashida Jones and more discuss how his work continues to influence our culture. A truly inspiring film, Finding Joe explores the studies of this famous mythologist as he takes us through the human psyche to discover the ‘hero’s journey’ pattern hidden in every story.

“An hour with master storyteller Paul Strickland is an hour well spent and not to be missed.” – Cincinnati Investigator. 13-time Fringe Best-of-Fest winner Paul Strickland will perform this collection of quirky and hilarious tales from his beloved Ain’t True and his uncle False.

“…the best tales you can hear without having to risk getting stabbed in the back of a boxcar.” – Edmonton Weekly View.

The Queen’s Cartoonists perform music from classic cartoons and contemporary animations. Performances are synchronized with video projections of the original films, and the band leads the audience through a world of virtuoso musicianship, multi-instrumental mayhem and comedy.

Behind the project hides a single question: is it possible to create jazz and classical music in the 21st century that everyone can enjoy? Even people who normally wouldn’t go to concerts? The Queen’s Cartoonists present a concert for everyone, regardless of age, gender or familiarity with the concert hall. Reception to follow.

Celebrate the life of Abraham Lincoln through the stories of those who knew him best! This lively and interactive performance features Lincoln’s childhood friend Austin Gollaher, his legal partner Billy Herndon and poet Walt Whitman. Austin Gollaher will tell the stories of Lincoln’s youth. Billy will share how his legal career helped him rise to power, a side of Lincoln few have studied. Walt Whitman’s best friend was at Ford’s Theater the night of the assassination and for many scholars his story is the best eyewitness account of that fateful night and what it means for America.

The 35th Annual National Exhibition of McNeese’s Works on Paper will be on view March 24 through May 6 in the Grand Gallery of McNeese’s Shearman Fine Art Annex. The juror for this year’s exhibition is Jennifer Dasal, creator and host of an art history podcast, ArtCurious. She was previously Associate Curator of Contemporary Art at the North Carolina Museum of Art. The opening reception will take place from 6:00 p.m. to 8:00 p.m., with the jury’s speech and the awards ceremony at 7:00 p.m.

This talented performer and his band are a unique offshoot of southern Louisiana heritage and roots. It’s local talent and zydeco-influenced music in its purest form, while showing the evolving styles of new artists. This is authentic Louisiana music loved by all and worth preserving for future generations.

Leo Pellegrino, better known as Leo P, is an American saxophonist from Pittsburgh, PA. His baritone sax moans and unique dance moves – along with his ever-changing hairstyle and matching outfits – took him from New York’s subways to star status at London’s Royal Albert Hall and international notoriety.

WALL-E, short for Earth-class Waste Allocation Load Lifter, is the last robot left on Earth. He spends his days tidying up the planet, one trash can at a time. But for 700 years, WALL-E has developed a personality, and he’s more than a little lonely. Then he spots EVE (Elissa Knight), a sleek, shapely probe sent back to Earth on a scanning mission. Wowed, WALL-E embarks on his greatest adventure yet when he follows EVE across the galaxy. With commentary by Brook Hanemann

Living in a bubble doesn’t sound like much fun. But “Living in the world of bubbles” is cool! The Guinness Book of World Records awarded Jeff Boyer the ultimate title for his mastery of bubble making and manipulation. Have the most fun with bubbles since you were in this memorable bubble bath as a kid. Truly an event for all ages. Reception to follow.

Derived from deeply personal experiences and emotions, Chavez’s collection of bilingual songs documents her journey from Latin roots to her life in Texas as a married, queer Catholic woman. Gina Chavez mixes the sounds of the Americas with tension and grace. She is a multi-ethnic Latin pop singer and nine-time Austin Music Award winner, including 2015 Musician of the Year and Album of the Year for her second album, Up.Rooted. Her independent album topped the Amazon and Latin iTunes charts after national coverage on NPR’s All Things Considered. His band’s Tiny Desk concert made NPR’s top 15 in 2015.

Dr. Robert Cooper writes poems and tells stories about the many places he has been and the people he has met. Many are about Lake Charles, with a hurricane or two thrown in, but some are inspired by experiences far removed from everyday Louisiana civilization (like being thrown off a horse over a cliff in the Himalayan mountains). His writing can be sad or funny or biting, but it’s always insightful.

The Flying Balalaika Brothers are a unique blend of gypsy folk and electric rock n’ roll. The group’s eye-catching interactive performances
feature instruments such as the giant double bass balalaika, which is a triangle-shaped string instrument originating in Russia. It’s huge, and it sounds great!

Dr. Mona Lisa Saloy, current Poet Laureate of Louisiana, is an award-winning author and folklorist, educator, and scholar of Creole culture. She has written articles, documentaries and poems about black New Orleans before and after Katrina. Dr. Saloy documents Creole culture in sidewalk songs, skipping rhymes, and hitting games to explain the importance of play. She writes about the importance of Black Beat Poets and the importance of maintaining the living Creole language. Reception to follow.

The season will end with cake and a champagne toast following a 30-year retrospective of Banners at McNeese State University. Speakers will include Mary Richardson, LaDonna McKnight and Randy Fuerst. Come share your favorite banner stories and be part of the conversation!