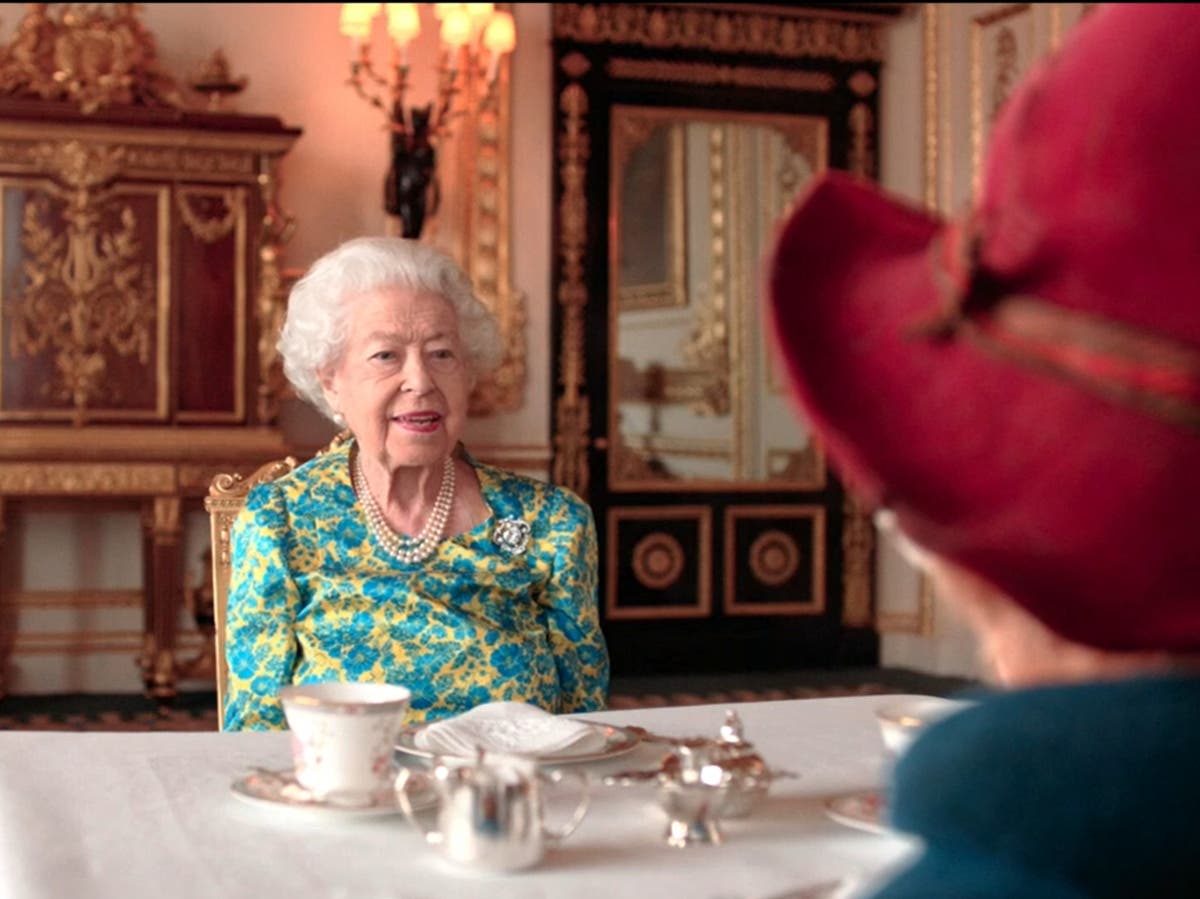 The Palace Platinum Party began with a pre-recorded surprise skit featuring the Queen and Paddington Bear.

Kicking off the performance is Queen + Adam Lambert with a rousing rendition of “We Will Rock You” – with the Queen joining via a cup of tea.

The Duke and Duchess of Sussex will miss the BBC’s Platinum Party concert at the Palace on Saturday night, as they celebrate their daughter Lilibet’s first birthday ‘privately’ in Windsor.

Other members of the royal family attend the star-studded performance, including the Prince of Wales, the Duchess of Cornwall and the Duke and Duchess of Cambridge. The Earl and Countess of Wessex and their children, Lady Louise Windsor and Viscount Severn, the Princess Royal and others will also attend.

Among the celebrations this weekend, the Queen skipped the Epsom Derby today after also missing the Platinum Jubilee Thanksgiving service at St Paul’s Cathedral on Friday.

Buckingham Palace has confirmed that Her Majesty watched the major sporting event on television at Windsor Castle after feeling “discomfort” after a busy first day of festivities on Thursday.

To conclude the festivities of this historic weekend, a Platinum Jubilee Competition organized by Buckingham Palace and the Department for Culture, Media and Sport (DCMS) will take place today to celebrate 70 years of reign of the Queen Elizabeth.

Thousands of artists from across the UK and Commonwealth will come together to tell the story of the Queen’s time as monarch and the changing face of British society.

It will be broadcast live on the BBC from 1 p.m. and on large screens around The Mall in London, Princes Street Gardens in Edinburgh and Bute Park in Cardiff.

Additionally, more than 60,000 people have signed up to host a Big Jubilee Lunch with 10 million people across the UK expected to take part in street parties, barbecues and other community celebrations.

Best Tributes to the Queen at the Palace Party

At the Platinum Party at the Palace last night, celebrities, politicians and members of the Royal Family paid their respects to the Queen to celebrate her 70 years of service as monarch.

James Bond actor Daniel Craig thanked the Queen for her unwavering grace and said he would “follow her anywhere”.

Michelle Obama, the former First Lady, said, “I feel deeply honored to have spent time with you over the years.”

Actress Dame Julie Andrews has thanked the Queen for “devoting herself” to the country and the Commonwealth.

Sports star Sir Mo Farah thanked the monarch for her service to “our country and our people” and Emma Raducanu said Her Majesty had “remained calm at all times”.

Prince William took to the stage to address the climate crisis. He said: “Today, in 2022 – as the Queen celebrates her Platinum Jubilee – the pressing need to protect and restore our planet has never been more urgent.

“But like her, I am an optimist. Decades of advocating for better stewardship of our world means that environmental issues are now at the top of the global agenda,” he continued.

“It is my firm hope that my grandmother’s words will be as true in 70 years as they are tonight, that as nations we will come together for a common cause, for then there is always room for hope.”

Prince Charles, accompanied by Camilla, Duchess of Cornwall, addressed the Queen as “Her Majesty” and “Mother”.

He said: “You laugh and cry with us and more importantly you have been there for us.”

The best moments of the performances of Party at the Palace

The star-studded Platinum Party at the Palace saw famous faces from around the world come together to celebrate the Queen’s Jubilee.

From big names such as Diana Ross, Rod Stewart and Queen to new faces like Mabel and Mrs. Banks, artists pulled out all the stops for their performances.

The performances were well received by members of the Royal Family in the audience, with Prince William, Kate Middleton and the children – George and Charlotte – waving Union Jack flags and singing.

What happened on Friday for the platinum jubilee celebrations?

On Friday night, the BBC’s Platinum Party at the Palace took place and saw stars such as Diana Ross, Queen with Adam Lambert and Duran Duran perform outside Buckingham Palace.

Prince Charles took the stage to pay a moving tribute to the Queen, whom he called a “mother”, and to thank her for her 70 years of service as a monarch.

Prince William also praised the Queen on stage for her resilience and dedication to the climate crisis.

The Epsom Derby also took place yesterday, which the Queen did not attend after experiencing ‘malaise’ after Thursday’s busy day of celebrations.

Princess Anne and other royals such as Zara Tindall attended the Derby.

Hello and welcome to the fourth day of The IndependentLive coverage of Queen Elizabeth’s Platinum Jubilee celebrations!

We hope you enjoyed today’s Platinum Jubilee coverage! We will be back tomorrow for the last day of this weekend’s celebrations.

Dianna Ross closes the show with her best hits as the crowd dances to Ain’t No Mountain High Enough.

The Duke of Cambridge hailed the Platinum Jubilee concert as full of “optimism and joy” as he praised the Queen for her “hope” for the future of the planet.

Prince William paid tribute to his grandmother’s positive attitude during a Platinum Party segment at the Palace dedicated to the environment and featuring Sir David Attenborough.

He echoed the Queen’s words during her speech at the UN’s Cop26 summit on climate change, when she said working together for a ‘common cause’ always gave hope.

‘You’ve been there for us’: Charles pays tribute to ‘mum’ the Queen

Prince Charles gave a moving speech for his mother’s 70 years of service to the country.

Standing alongside the Duchess of Cornwall, Charles asked the crowd to applaud loud enough for the Queen to hear 20 miles from Windsor.

Heir to the throne Charles, told how the Queen had laughed and cried with the country over the decades as he hailed her ‘life of selfless service’.

The future king, who was joined by his wife the Duchess of Cornwall, said, addressing the absent monarch, who remains head of state at the age of 96 despite his mobility problems: “You promised to serve all your life – you keep on delivering.”

Prince Charles delivers a speech at the end of the party.

He said, “You are the head of state, and you are also the mother.

“My dad would have enjoyed the show and wholeheartedly joined us in celebrating all that you continue to do for your country and your people.

“In hindsight, you will think of red boxes filled with gvvenemt papers at the end of the day.

“How things have changed, we think of all you have done to make the Commonwealth such a great cause for good. And there was still time for fun in the middle of work.

“But I know what really gets my mum up in the morning. It’s all of you, ladies and gentlemen.

“All of you watching at home, represented tonight in this great audience.

“Your Majesty, you have been with us in our difficult times and you bring us together to celebrate times of pride, joy and happiness.

“You met us and talked with us, you laughed with us and cried with us. And above all, you have been here with us for these 70 years.

THE RESURGAM FESTIVAL: the spirit of the city’s love of music and the arts is reborn