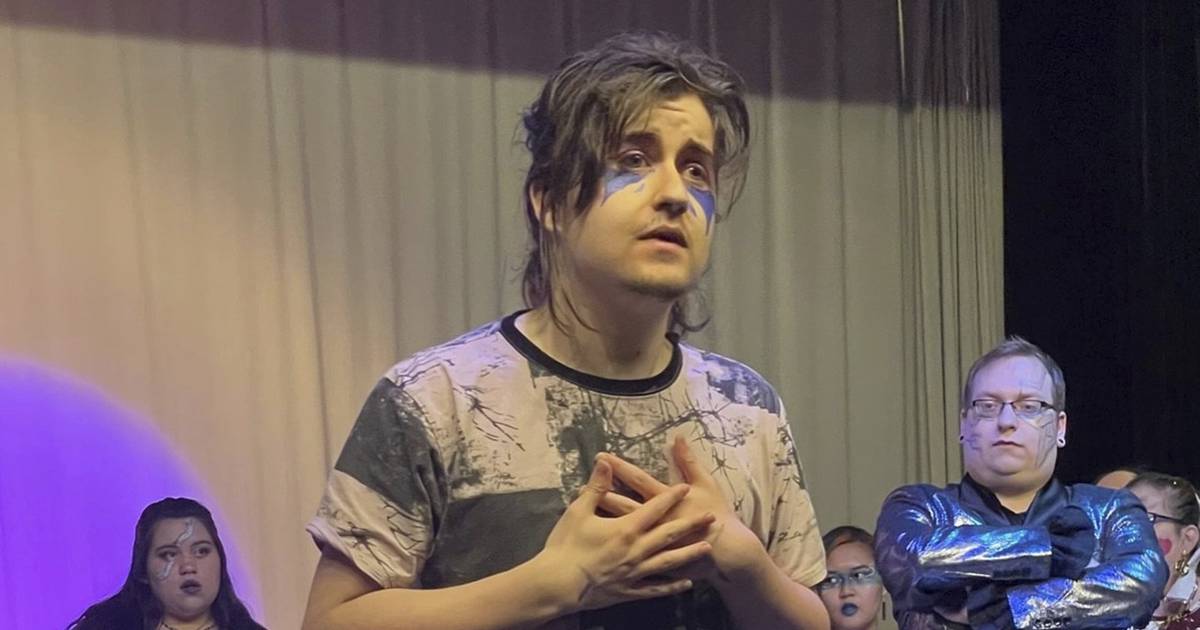 Those who come to the musical “We Will Rock You,” which debuts June 17 at the Bicentennial Park Theater in Joliet, will hear many of their favorite Queen songs, including, of course, “Bohemian Rhapsody.”

But the musical is not a biography of Queen frontman Freddie Mercury. “It’s not ‘Bohemian Rhapsody’ at all,” show director Lori Carmine said, referring to the film chronicling Mercury’s life.

“‘We Will Rock you’ is a fictional story where Queen’s music is used to drive the plot forward,” Carmine said. “It’s set in the year 2330. The premise is that artificial intelligence has taken over the entire planet and the music has to be processed by the computer. There are no more musical instruments in the world.

Carmine, who is also the cultural affairs officer for the city of Joliet, said the musical is celebrating its 20th anniversary. “It was written in 2002 and started in London where they’re doing a revival this year,” she said.

While working as a stagehand at the Rialto Theater in Joliet a few years ago, she took part in the “We Will Rock You” national tour. “Everyone loved this show,” Carmine said. “That’s why I decided to do it at the Bicentennial Theatre.

“The musical has a story with a story arc and a conclusion,” she said. “But there’s a lot of singing and dancing,” she said, adding that the 30+ cast have plenty of opportunities to sing along to the rich harmonies Queen is known for.

The musical, which will feature a live pit orchestra, features an underground band called the Bohemians, who are looking for the person to bring rock and roll music back to the planet. A high school boy named Galileo and a high school girl named Scaramouche show signs of rebellion against the way the planet is run.

The government, which resides in Ga Ga Land with people who have the same opinions and dress the same way, is trying to brainwash young people into getting independent ideas out of their heads. They run away and meet the Bohemians who live in a hotel and try to create new music and make musical instruments.

Queen’s music is used to drive the plot forward, for example, when Scaramouche and Galileo meet the Bohemians, they sing “Crazy Little Thing Called Love”.

Mark Epling provides vocal direction and leads the orchestra, while Lori Bowen works on the choreography.

Carmine’s daughter, Elana Carmine, who is studying costume design in college, works on the costumes for the production.

Conformists living in Ga Ga Land will have shiny, sleek matching outfits with precise, sculpted hair. Bohemians wear whatever they find in nature as they search for pieces of rock and roll history. They will wear bell bottoms or fishnet stockings or other clothes that people wore in the rock and roll era of the 50s, 60s and 70s.

The stage will have a ramp that breaks through what the directors call the theater’s fourth wall, where the audience sits. “We wanted it to feel like a concert,” Carmine said. “The public must feel very immersed in it. We will go into the audience and address the audience and sometimes interact with them.

Carmine admitted that directing a musical with a large cast is a lot of work. “But the payoff is going to be a lot of fun,” she said.

We’re a community center and it’s for the community, so everyone has a role to play. Some will go on stage for the first time. They can learn from people who have more experience and get their feet wet. Maybe it’s a mental break or something fun or something they want to continue later.

Carmine said the storylines address the idea of ​​having too much technology and not being yourself. “That’s one of the big lessons,” she said.

News from the southern suburbs delivered every Monday and Wednesday

Carmine promises those who come “that they will definitely have a great time. It will take your mind off all current situations. Besides, it’s Queen’s music. I can’t imagine anyone who doesn’t love Queen.

‘We will Rock You’

Sheryl DeVore is a freelance writer for the Daily Southtown.