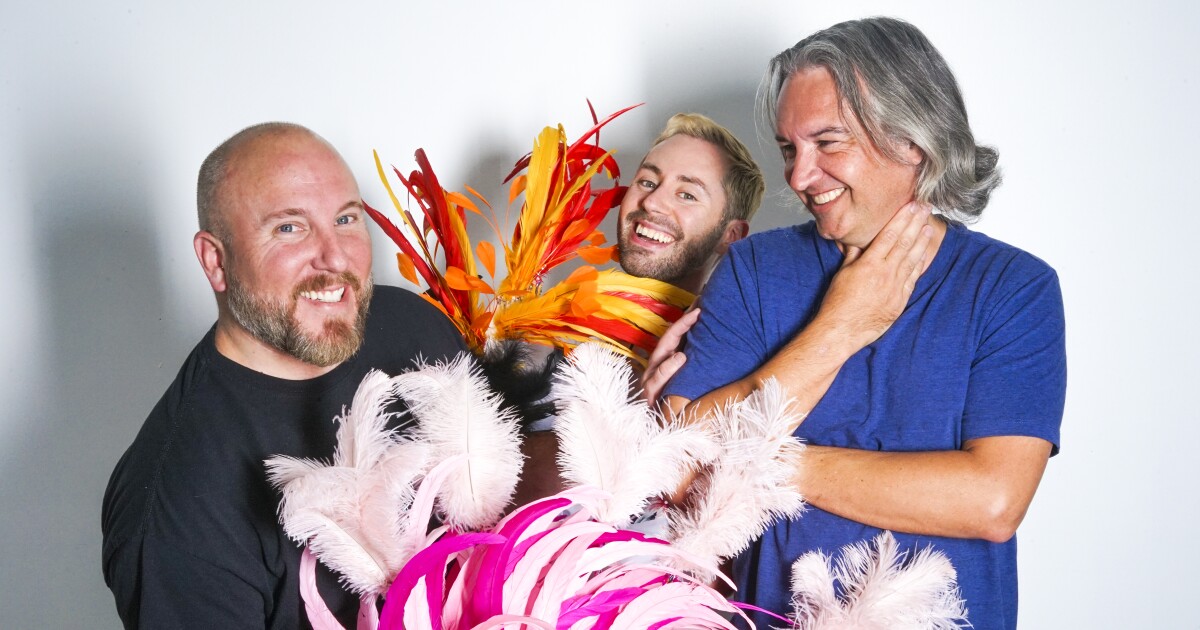 Alley Repertory Theater artistic director Buffie Main knew that after 20 months of darkness due to the pandemic, she had to do something special.

“I chose a different first game of the season,” she said. “And then the longer COVID lasted, the more I knew joy should be at the heart of it.”

So Main thought of â€œPriscilla, Queen of the Desert,â€ the hit Broadway and West End musical based on the iconic 2011 film. The score includes hits from The Village People, Pat Benatar and Cindy Lauper and anthems like “I Will Survive” and “It’s Raining Men”.

Main, along with one of the production co-stars Alley Rep, Jodi Eichelberger visited Morning Edition host George Prentice to talk about their vacation offer and its themes of unconditional love, family, d inclusionâ€¦ and a disco soundtrack to beat the band.

â€œI think right now all any of us can do is seek joy, and if we can find it, then I think we’ve created something that we all needed. So, I am excited.

Read the full transcript below:

GEORGE PRENTICE: This is the morning edition on Boise State Public Radio News. Hello. I am George Prentice. As we come out so cautiously fromâ€¦ well, now almost two years of a life without live, in-person entertainment, we’re more than a little anxious to see what we’re going to encounter. And oh my God, Alley Repertory Theater is coming back with quite a deal. Buffie Main is here, artistic director of Alley Rep and director of their brand new musical; and the ever-fabulous Jodi Eichelberger, who stars in the production, who is Priscilla, Queen of the Desert Buffie Jodi. Hello.

BUFFIE MAIN: Oh, hello. Thank you very much for having us. We are so excited to be here.

PRENTICE: Ok, Buffie, how long has it been since Alley Rep’s been on the stage?

MAIN: It’ll be 21 months next week, so it’s a long time to be off the boards and to be dark. And we are. It was really powerful to be back, really happy and alsoâ€¦ it’s not like riding a bike. So it was also a bit difficult to bring them together to put on a show.

PRENTICE: So let’s talk about it. How did it go … reemerge?

MAIN: You know, I would like Jodi to talk about this a bit. From an artistic director’s perspective, there are some really complicated things with COVID that have changed the rehearsal room and are changing the way actors can relate to each other and the way you think about when the rehearsal can take place. We extended the rehearsal process just in case someone got sick to create space for people who are not used to having a regular schedule with people. You know everyone’s been really isolated for almost two years so coming back with people in a rehearsal process has been an energetic shift for all of us and really good 93 percent of the time and the other percent of the time a little bit. overwhelming. And really, being with people as we reconnect has been part of the rehearsal process and it’s new and it’s all good but different.

EICHELBERGER: Yeah, my last gig was in February 2019, and as we started rehearsing for Priscilla and I realized that I hadn’t performed for probably a year or more. So the vocal cords, even we feel like I had to pull it out of a dusty corner and shake it. Fortunately, the singing returned quite quickly. It’s interesting a lot of our rehearsals, we wore masks. And so in some ways when we get to the rehearsal point where we were testing and the masks came off, it was almost like you were seeing the characters on the show rather than your fellow actors, because during the rehearsal the actors were eyes and eyebrows, and then suddenly you had mouths too. The other thing I think about is, you know, I get a little carried away. I don’t have that correct phrasing or this costume change didn’t go perfectly or I would like to do something different here. And I just realized from the response from some people in the audience, this is the first thing I’ve been to in almost two years, and it was amazing to be with a bunch of people again. and to experience that, you know, these other things seem a lot more insignificant than they maybe before when we took going to the theater for granted. And now it just means more.

PRENTICE: The worst kept secret in this city is how much of a theater nerd I amâ€¦ surpassed only by my love of cinema. Thus, Priscilla, Queen of the Desert, was a revolutionary film. But Buffie, there might be a few people who might not know the story, so in 30 seconds or less tell us the story.

MAIN: So the 2011 musical takes the film very closely, which is the story of three friends crossing the desert in a crazy bus to find one of the twitchy characters, family, and along the way they meet again. .

EICHELBERGER: Yes. In fact, just today, it’s kinda crazy. The official The Village People Facebook page just shared the production of The Alley Representative because we feature their song Go West on the show and seeing us mentioned on The Village People’s social media is truly surreal.

PRENTICE: Jodi, drop some titles. Tell the audience some of the songs.

EICHELBERGER: We have some Pat Benatar: â€œWe belongâ€, we have Cyndi Lauper. We have “I Will Survive”.

EICHELBERGER: Yeah, the audience’s got their arms up and they’re moving them around and clapping and. Smile and so it’s a really different experience to play a lot of different music, you know, from all kinds of sources and put it into a story.

PRENTICE: Buffie, your security protocols aren’t much different from the newer Broadway protocols, are they?

MAIN: We are checking vax at the door. We ask people to wear masks. And one of the things that our board of directors decided is that we believe that the theater in the future will have some of these security protocols for a long time, and we want to ensure the safety of our artists and our public. And so let’s go. Let’s check the door. Let’s put on our masks and enjoy the show. And at the end of the day, if someone gets sick for a show like Ali Rep, it’s going to be really hard on us. So that’s going to potentially make the show go away. And so it’s worth taking precautions, both because that’s what we want for each other in our community, but also what’s needed to make the game happen.

PRENTICE: You opened on Thanksgiving weekend. How was it ? It was probably more than just opening another show.

EICHELBERGER: Well, seeing the weird gathering was pretty special and there was a different energy there. Just feeling this is the first time many of these people have experienced something together. I mean, it was also very stressful for us because there are so many elements in this show. I think one of the interesting things about it and you know Buffy asks me for my opinion sometimes, but not always. I probably would have told him that this show was too big, you know, because for the group stage of this house, it’s just such a big show. But what happens with that is you experience a great show in an intimate way, which is so fascinating. And I think that’s part of why there are so many loads in the room because it’s like everyone’s front row seats at their favorite rock shows. It’s fair and you and you can feel it on stage too. While on a big Broadway stage, you know, there’s a big distance between you and the audience. I mean, you feel their energy, but that feeling that that energy was was very different.

PRENTICE: I saw the show in New York City, and like Jodi said, it was huge. I didn’t know there was so much glitter in the world. Did you just imagine that in your mind at Alley Rep?

MAIN: You know, I picked a different season opener; and then the longer COVID lasted, the more I knew it would be important for joy to be at the heart of it. And so what’s cool about Ali Rep and Boise, where it is right now, is that we have this plethora of incredibly talented people. And when you bring them together, the magic happens. And that’s all I knew. I knew we had the talent to do this show. It’s more complex for us in the context of costumes, makeup and music than we’ve ever done before. And so I always push Ali up this way. And on this one, I think I definitely pushed us on the bus. So I recognize him. But I think what happens when we challenge each other during this time is we keep creating more and we keep creating better. So I’m excited about what’s going on because the chorus sound is amazing. The costumes are so creative. There is a lot of glitter and there is crazy hair. You’ve never seen hair like that on stage, both in wigs and in real life. I think it’s magic and it hits exactly where we needed it to. I think right now all any of us can do is seek joy, and if we can find it, then I think we’ve created something that we all needed. So I am excited.

PRENTI: Okay. Give us the program of the performances. What are the dates in December?

MAIN: Ok so we’ve opened up Thanksgiving week and now we’re back on stage on Thursday December 9th. We run this weekend, 9, 10 and 11, then the following weekend, 16, 17, 18, and we close on December 19. It’s a Sunday morning. So, just in time for everyone to put on their holiday costume and sing holiday songs, so we’ll take you through Christmas week.

PRENTICE: Yes, it’s a family show, Jodi. It is certainly a family. It’s about relationships and what. We have what we think we have lost and what we find again.

EICHELBERGER: Yes it is. And you know, a lot of them are very contemporary too. And when I play a character, I have to find things that I have in common with that character to use as a resource. And you know, there’s a very poignant part of the show where my character says to another, you know, the city is dangerous, but that’s but that’s where we’re safe. And I have to say that even in Idaho today, my husband and I don’t feel entirely safe traveling to more remote areas of our own state. And so it’s not a problem that’s buried in the past. It’s not. It’s always a concern for LGBTQ people as well as where can we be, where can we be ourselves? Where can we show our true colors?

PRENTICE: This is Jodi Eichelberger, costar in Priscilla, Queen of the Desert. This is Buffie Maine, production manager and artistic director of Alley Rep. Happy holidays, guys, and happy racing.

EICHELBERGER: Thank you very much.

PRINCIPAL: Thank you, Georges. We love your hidden theater secret. Your secret is safe with us.

Daily find: Brooklyn jaws want to cheer everyone on “Fever”