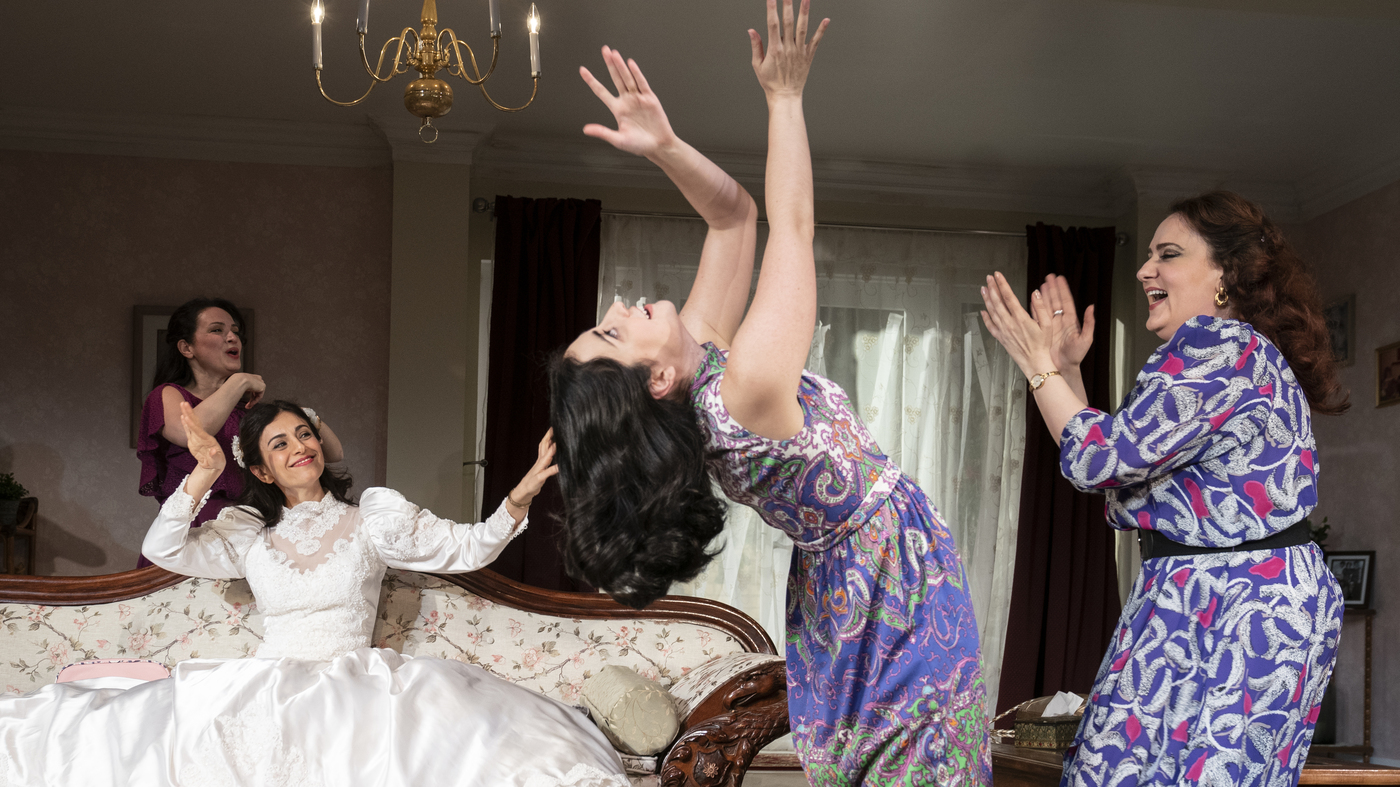 The playwright Sanaz Toossi has just won a playwright’s grand prize for her first play produced.

The playwright Sanaz Toossi has just won a playwright’s grand prize for her first play produced.

It’s not often a playwright gets two productions at major nonprofit theaters in a matter of months, let alone a playwright who has never staged a single play before.

When audiences entered the Atlantic Theater in February for previews, she said, she was nervous. “Oh my God, the terror of an audience coming in was definitely something I wish I had been prepared for. But also, something I think you can only learn by having an audience come in!”

Toossi need not have worried – English not only won local critical acclaim, but also received the Lucille Lortel Award for Outstanding New Off-Broadway Play. Now a second piece, wish you were Here, opened at Playwrights Horizons.

In both works, she said, “I wanted to shatter those expectations of what a play set in the Middle East should be aesthetically and also tonally. There are no violent moments.”

Toossi grew up as the child of Iranian immigrants in Orange County, California, going back and forth to Iran several times as a youngster. English started as his graduate thesis at NYU. Trump’s travel ban, which prevented Iranian citizens from traveling to the United States, had just been implemented, and Toossi says she was “quietly furious.” Her adviser, playwright Lucas Hnath, told her to “just write what you need to write. Write what you love. Don’t write what you think is smart or cool. Write from your heart.”

And that’s what Toossi did.

“I’m a proud daughter of immigrants. I grew up with a lot of first-generation kids,” she said. “To feel this disrespect towards my parents, Middle Easterners and Muslims in general, I felt the need to write about the pain of being misunderstood.”

She decided to stage this first play in an English as a Foreign Language class in her mother’s hometown of Karaj, Iran in 2008. The students and the teacher plan to either emigrate or return from foreign and everyone feels caught between two cultures. Toossi said she wanted to put the audience in the shoes of the characters. “I knew they would never understand how hard it is to learn a new language and feel stupid and feel, you know, isolated where you come from.”

She created an interesting conceit for the play: when the characters speak Farsi, they speak in fluent, accent-free English. When they speak English, they speak hesitantly, with accents. It is only at the end of the play that the audience actually hears two characters speaking in Farsi.

Both English and wish you were Here are gentle character studies, where an accumulation of small details is added to something deeply emotional.

“I think she, like Chekhov, is in love with the absurdity of what it means to be alive and what it means to be human,” said Gaye Taylor Upchurch, wish you were Here director. “And investigating that and looking at people in those moments that apparently aren’t great moments in their lives, but really blow everything up about them.”

Marjan Neshat (in a white dress), Roxanna Hope Radja (behind the sofa), Nikki Massoud and Artemis Pebdani in wish you were Here.

Marjan Neshat (in a white dress), Roxanna Hope Radja (behind the sofa), Nikki Massoud and Artemis Pebdani in wish you were Here.

wish you were Here traces the ups and downs of the friendships of five women over the course of 13 years in Karaj, Iran. It begins in 1978, during the revolution, and continues during the Iran-Iraq war, until 1991 – when only one of these women remains in Iran. While these major political and social changes are happening in the background, women are celebrating weddings, talking rudely about bodily fluids and sex, and laughing a lot.

“Very often I think with Middle Eastern plays we’re tasked with telling these ‘other’ stories,” said Iranian-born actress Marjan Neshat, who appeared in both plays. “And it’s so refreshing and so profound to be able to play these radical, multi-dimensional, funny, nuanced women.”

Toossi said that these words could describe his own mother, and that wish you were Here is a love letter to her. She highlighted a character’s monologue:

She will have a home./A home; a house./I won’t teach her Farsi./She’ll never have to know what an F1 or an IR2 is./She won’t even know the word revolution./Never./Never.

She’ll never know how fast this earth can spin under you./How one day you can have a home and the next day/As you’re hurtling through the air/You’ll have to beat home/the word home/the idea of house/ like everything that ever existed or will exist again.

This monologue, she says, “is of a mother describing what she wants for her daughter. And it’s 100% my mother.”

wish you were Here takes place at Playwrights Horizons in New York until May 29.