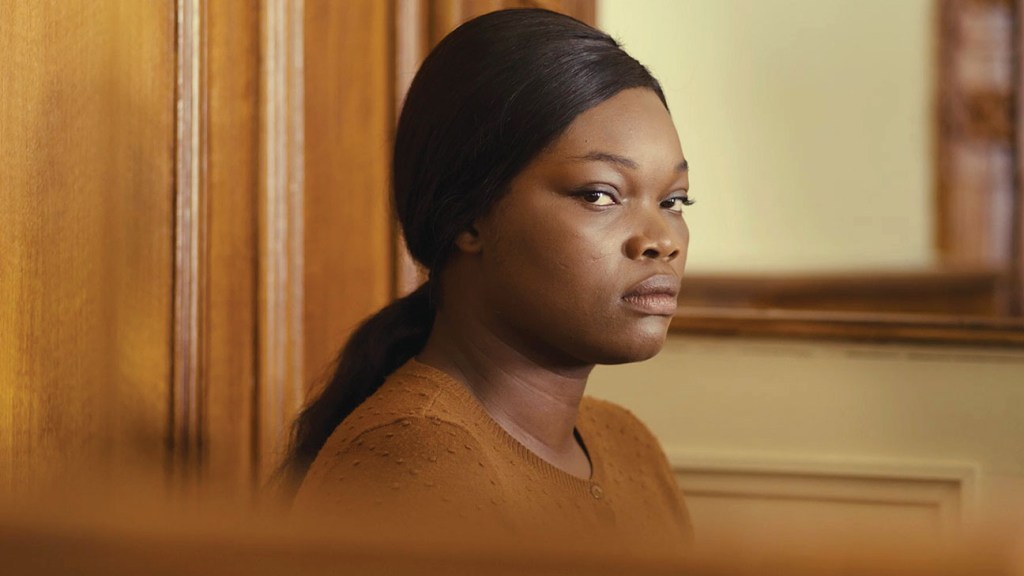 When Guslagie Malanda landed the lead role in the acclaimed French courtroom drama Saint Omer — winner of the Venice Film Festival’s Silver Lion and France’s official submission to the international race for the Best Picture Oscars — she had only appeared in one film (French director Jean-Paul Civeyrac’s 2014 drama My friend Victoria) and had not played for over seven years.

Although obsessed with movies and theater – she estimates she has been to the theater or cinema three times a week since she was 14 – Malanda, now 30, says acting is not was never something that was even remotely on his radar. “It’s a bit of an unrealistic dream to become an actress,” she says. “I grew up in France, where none of the great actresses are black – none.”

Malanda won the role in My friend Victoria after attending open auditions on a whim when a makeup artist friend involved in the project suggested she might be a good fit for it. Her performance was well received and she was signed by an agent – but she subsequently declined every role offered to her.

“All the things were so cliché, like playing an immigrant, a prostitute or a cleaning lady,” she recalls. “I decided to go back to my studies in art history and wait for the time when things would be better for black artists in the industry.”

After graduating, Malanda began a career as a freelance curator (a field in which she is still very active) and later befriended rising documentary filmmaker Alice Diop, with whom she shared circles. overlapping social and professional. Diop, cesarean section for his first short film Towards tenderness and winner of several awards at the 2021 Berlin Film Festival for her documentary feature Weencouraged Malanda to audition for a role in the film she was developing as her first narrative feature – what would become Saint Omer.

“After going through all the stages with Alice from the making Saint OmerI realized that being an actress, in fact, was always in my gut – maybe since the beginning of my life,” Malanda says now.

Saint Omer is inspired by the real-life case of Fabienne Kabou, a young Senegalese woman convicted in 2013 of murdering her 15-month-old daughter by abandoning the child on a beach in northern France to be swept away by the tide. Diop’s film follows a French-Senegalese author named Rama (Kayije Kagame) who becomes increasingly obsessed with the case and travels to the northern French town of Saint Omer where the trial will be held, with the intention of transforming the tragic event into a literary event. novel. But as she learns more about the life and actions of the accused woman – and reflects on the similarities and differences between their lives as women of Senegalese descent in French society – she becomes more increasingly anxious about her memories of her own immigrant mother, as well as her pregnancy. , which she hid from those around her.

Diop offered Malanda the lead role of Laurence Coly, his version of the enigmatic murderer who stands trial at the heart of the story. Malanda says Diop basically only gave her two directives during preparation and production: Sit very straight in the courtroom – like the woman in Leonardo da Vinci’s timeless portrait. La Belle Ferronniere — and to always fix one’s gaze, intensely, on a fixed point in space.

Malanda did some initial online research on Fabienne Kabou and was immediately terrified of the process. “I had nightmares for a year before filming – about me as her or her standing in front of me,” she says. “It was awful. But at the same time, it was appropriate, because the real story is awful.

Diop and Amrita David’s script required Malanda to deliver long monologues from the witness box. “Learning the text was not difficult for me, because I have a good memory, but I told him that I really had to learn to breathe, because some sentences of the script were very long and the situations very intense”, Malanda remember. The solution she arrived at was to work with a tai chi master.

“I saw him twice a week and really focused on my breathing. Sometimes I cried during these classes, because I realized I was going to play a murderer and I felt like I was becoming her,” Malanda explains. “But it helped me a lot. Breathing is living, right? All the things I had inside me – my strength or my pain – I was able to calm them down thanks to this exercise of breathing.

Diop’s production process was an innovative mix of directing fiction films, plays and documentaries. Her team filmed in the courthouse where the real trial took place, and she chose people from the surrounding community to be in the audience as witnesses to the proceedings. The film was shot in chronological order, with the entire courtroom cast present and in their seats, fully performing whether they were filmed or not.

The trial scenes were shot over three and a half weeks, with takes lasting up to an hour. Malanda says she often spoke for 40 uninterrupted minutes from the podium – all of it meticulously written – even though only about 15 minutes of that footage made it into the final film.

Saint Omer is two hours by train from Paris, where Malanda lives. During the first break of the weekend in production, she returned home to take a break. “As soon as I arrived, I knew it was impossible,” she recalls. “I couldn’t be home. I was totally Laurence Coly; I was no longer Guslagie. I had constant nightmares, but my days also felt like a waking nightmare. It was very strange and intense.

But on the last day of filming, Malanda says, all the personal torment and weight she felt suddenly lifted. She describes it as “the last day of my nightmare”.

Malanda adds, “I think it’s because we shot in chronological order. The last day of shooting was the last day of my trial, so I could leave it behind. At the same time, I was very sad. I suddenly stopped thinking about the killer and thought about the girl, the victim. It was really a reconciliation with the murder. For two years I focused on Laurence Coly — and suddenly, at the end of it all, I was thinking about that little girl whose life was taken.

This story first appeared in a standalone November issue of The Hollywood Reporter magazine. To receive the magazine, click here to subscribe.