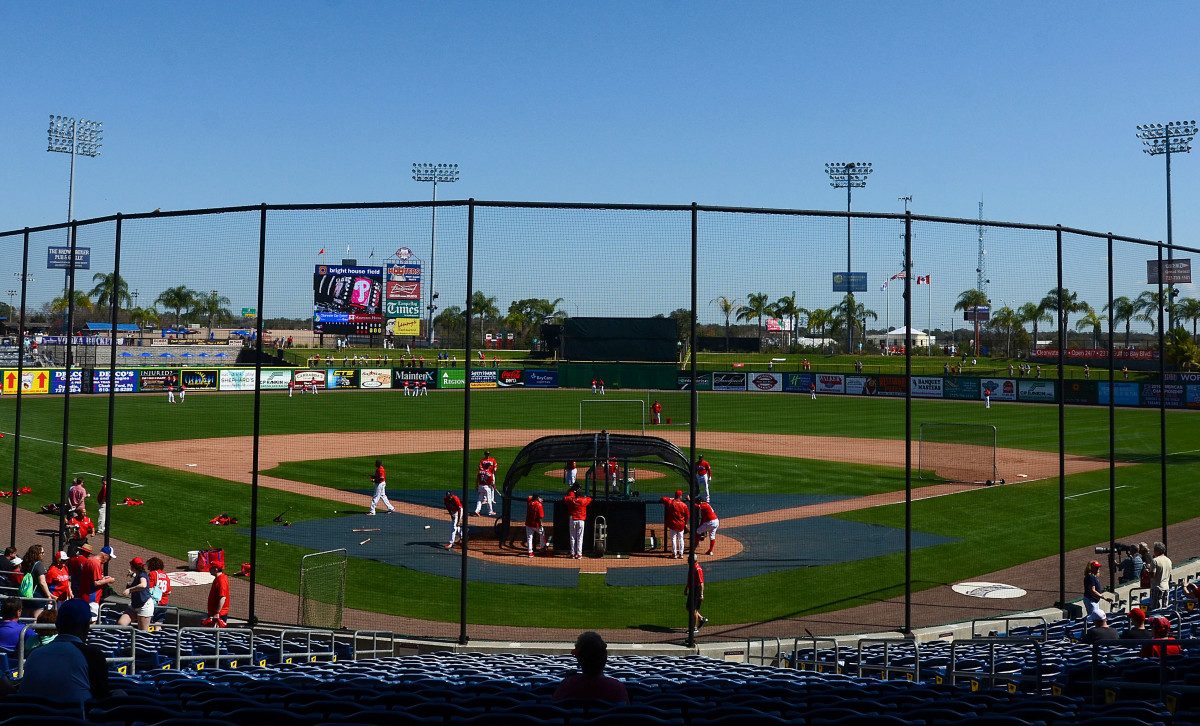 Inside the Phillies had the chance to chat with Philadelphia Phillies minor league pitcher Jeff Singer.

Singer signed with the Phillies in October 2015 and spent five seasons in Philadelphia’s minor league system. He appeared in 202 games across A, AA and AAA. In 2021, the southpaw posted a 4.75 ERA and struck out 67 in 53 innings, earning the IronPigs Pitcher of the Year award.

The 28-year-old is now giving his thoughts on the MLB lockout from a minor leaguer’s perspective and how it affects their ultimate goal: making his Show debut.

Lauren Amour: Can you describe a typical day during the off-season in minicamp and spring training? How does this differ from a typical day in the regular season?

Jeff Singer: So basically it’s my seventh year, our days have changed drastically from my freshman year in 2016 to this year in 2022. It’s changed a lot, I think it’s changed pretty well for us, especially with our time to recover . Usually on days like today, I would pitch live, so I could get to the pitch around 10 a.m., but on the days we weren’t pitching live, I would get to the pitch around 8 a.m., I was situated, I was getting breakfast. We would go into our workout room, relax our arms, do some shoulder stretches, just the normal stuff. Head to the weight room, activate our body, then we would have skills, just to understand some of the things we need to improve in; stretch with a few throwers from our group, play catch.

Depending on the day, we either do hard sprints or something on the assault bike. Then I go to the gym and exercise, and it’s a normal day. If it’s a day when you have to cast live, you add it to the mix. Coming from Triple-A last year, there’s a lot more time, especially if there’s a home game, to sit and relax at the clubhouse. But the biggest difference is, obviously, we’re doing everything in a pretty good streak here right now, which has been great.

Lauren Amour: With the MLB lockdown, a lot of questions have been raised about minors and compensation. How do you think the system should be changed to better support minor league players?

Jeff Singer: I mean, being a minor leaguer is tough, especially then and now, it’s tough being a minor leaguer. Especially in terms of money, being away from home, finding [housing]but it looks like this year we’re going to have [housing] paid, which is great. But honestly, it’s one of those things where it’s not my decision, it’s not me making those calls, so you just have to wear it. It’s a chore once you get to the big leagues you appreciate it more but I’m not allowed to make those decisions I’m not in those meetings so I couldn’t really you say it.

For me it’s not my first year, it’s my seventh, so I’ve been there, and I can tell you it’s much better than 2016 with the way it is in the leagues minors. So, it’s one of those things where it seems to get better and better for us every year, so hopefully that continues. But again, it’s one of those things where we’re not in these meetings, we’re kind of just here and trying to do it. You can either put your head down, cast well enough to go to the show or you can complain, that’s what it is, you just don’t want to stir the pot sometimes.

Lauren Amour: With the 2020 season shortened and now locked out, how has that hindered your development and that of other minor leagues and major league schedules?

Jeff Singer: It’s definitely hard. You know, with the arrival of 2020, I think I had one of my best spring workouts; I know I spent a lot of time in major league camp as a substitute and I pitched really well. And then COVID-19 happened, I couldn’t play baseball, but I was very lucky because my family and friends were still healthy. It’s one of those things where you have to look at the bigger picture, and it kind of showed some guys that there’s life after baseball or life during baseball. For me at that time, it was a bit difficult to really bring those two perspectives together. It sucked for everyone, it wasn’t just baseball that suffered, it was the whole world.

But with the lockout, you know, it’s hard. We don’t have our 40-man guys here, we don’t have our big league guys here to really see what they’re doing and what got them into the big leagues. Now that I’m one of the older guys, I’m kind of the one who best understands what I’d like to think, about the grind and hard work, and doing what you gotta do for yourself to prepare. So really, all you can do is go about your business and do your job. As far as the lockout and everything right now, I know the minor league season is still going as it is, so all you can do is go out there and compete.

Lauren Love: You’ve been in the Phillies system since 2015 and you’ve seen it go through managerial changes. How do you think the culture has changed during this time?

Jeff Singer: He has changed a lot. I’m on my third general manager, I’m on my third field coordinator, third minor league coordinator. You can see some of the old ways are still there, you can see it’s nicer back then, whether it’s Driveline, with those guys who really like weighted ball programs, guys who really like not do long distance running, much less time standing, standing.

From 2016 to 2022 I was just blessed to be able to be part of this organization and have a job, you don’t want to rock the boat too much where you have to mind your business. I grew up in the generation where whatever your coach says goes, whatever your manager says, you do. I like to think I’m one of the last guys to figure this out and pick on this.

Lauren Love: How has the past system helped you grow? And do you think Preston Mattingly and the new staff will help continue this development?

Jeff Singer: I think Preston and everyone we have who have come this year are doing a great job. They seem to really care about what the Phillies are like, the culture, the Philadelphia lifestyle, being blue collar and everything, they get it. I’m really excited to see how it will culminate in the season. Again, I think it was more difficult in terms of 2016, 2017, 2018, etc., it was difficult in those years. Especially spring training, we had some really, really long days, and okay, I don’t know what it’s gonna be like because we haven’t officially started minor league camp yet, but it’s were working days.

When I say that, I mean, we were in the field for eight hours during that time, and there was a lot of sitting time, so it’s really nice to see that we’re doing our job, you know what you’ve got done, you feel good about it, go home, rest and feel ready for the next day, that’s something I really appreciate. They have been great. We’ve got a whole new mental skills team, so they’ve been really good at mentally talking to guys, understanding the way guys think, and I think we’re doing a great job with that as well.

Lauren Love: You’ve been teammates with many different Phillies prospects at every minor league level. Has anyone left a lasting impression on you or helped you develop as a player physically or mentally over the past six years? If not a player, a coach?

Jeff Singer: I’ve played with a lot of guys who are in our major league system right now. But Shawn Williams is probably one of my favorite managers to play, and he’s still with the Phillies, which I’m happy about. I would do anything for him when it came to playing in the game, every time he gave me the ball I was excited for that. Same thing with Aaron Fultz who is no longer with the Phillies, I had him as a pitching coach almost every year. They are two guys who I think have really helped me.

As far as players go, I’ve had a good relationship with a lot of former Phillies. Some of these guys like Luke Williams became really good friends, we used to talk baseball and mentally relate. Same thing with Mickey Moniak, and even guys that were with the Phillies, like Austin Bossart, Drew Stankiewicz, Luke Leftwich, all those guys, they really helped me get into the system and grow.

Lauren Love: What are you currently focusing on to step up your game in 2022? What are your goals for this season?

Jeff Singer: It’s kinda hard, I was [IronPigs] Pitcher of the Year last year, so I think I have to keep doing what I’m doing. They tell me to do something, I’m going to do it with respect and do everything I can to get to the major leagues and help the big league club.

Lauren Love: You were born in Philadelphia and graduated from Holy Cross. Did you root for the Phillies growing up? Favorite players you idolized?

Jeff Singer: I grew up as a fan of all four Philadelphia sports teams, the Eagles, Flyers, Sixers, Phillies, even the Wings and Union when I was growing up. Randy Wolf was a guy I really liked watching play, Cliff Lee, all the good left-handed pitchers the Phillies had in those days. Obviously, with the guys from the 2008 team, like Ryan Howard, Chase Utley, Jimmy Rollins, Jayson Werth, Pat Burrell…all of those guys were great fun to watch growing up. But I would say Randy Wolf was probably my favorite pitcher growing up.

Many thanks to Jeff Singer for taking the time to speak with Inside the Phillies about his experience in baseball and the MLB lockout.

More IS Inside the Phillies: