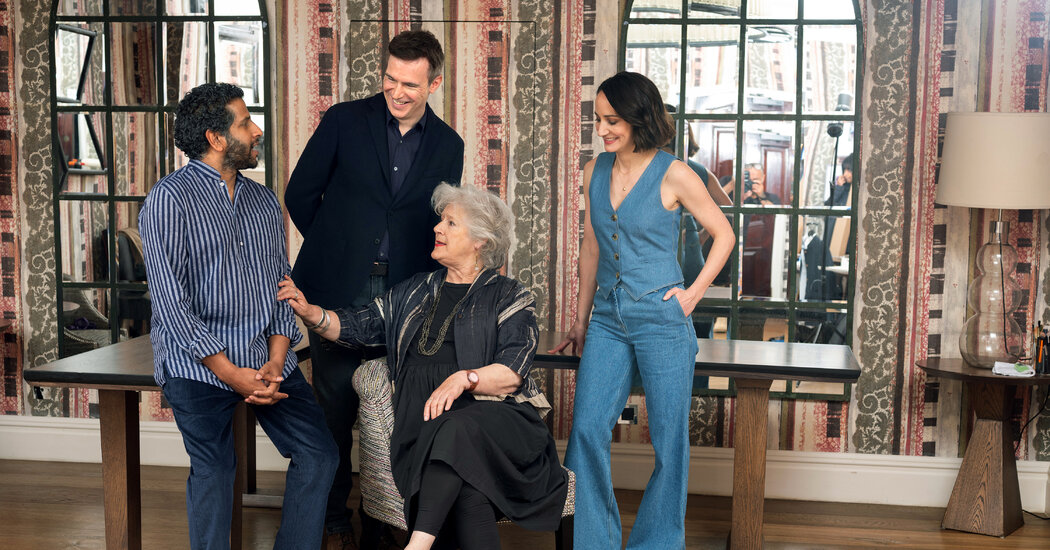 A look at “Ten Percent”, a British “Call My Agent”! Remake

LONDON — About five minutes into the first episode of “Ten Percent,” the British remake of the hit French show “Call My Agent!”, partners and their assistants at fictional talent agency Nightingale Hart are debating how to tell a famous actor that she was deemed too old for a movie role.

“I can’t lie to her, obviously,” Dan (Prasanna Puwanarajah) says. “No, no, no,” the other officers interject. “But obviously I can’t tell her the truth,” he continues, setting off another horrified chorus of “nooo.”

“It’s the narrow edge along which agents must walk every day of their lives,” said John Morton, executive producer and screenwriter who developed the series, which will premiere on Amazon’s Prime Video on April 28 in Great Britain. Britain and on Sundance Now and AMC+ in April. 29 in the United States. “Relationship with truth is a fascinating juggling act in this world,” he said. “It’s a little understood problem outside of the industry – and not even by customers inside – and a really interesting area to play around with.”

The connections, dependencies, and emotional bonds between four agents and their clients are central to the comic strip in “Ten Percent,” just as they were at the fictional Parisian agency in “Call My Agent!” (“Ten Per Cent” in French).

This series was a hit in France after its 2015 debut there, but received little international attention until the coronavirus pandemic hit, when the show became a word-of-mouth phenomenon. (Turkish and Indian versions have been released, and South Korea, Italy, Malaysia and Poland all have adaptations in development.)

When Morton – the award-winning writer and director of UK shows ‘Twenty Twelve’ and ‘W1A’ – had his first encounter on ‘Ten Percent’ in 2019, the French series was still ‘a cult hit with a number of very loyal fans. followers,” he said. “I was a huge fan, and my first thought was, ‘the bar is already so high, how can we not spoil this?’ Then the bar rose higher.

Morton retained much of the structural framework of “Call My Agent!”, with four central characters who are at least superficially similar to their French counterparts. There’s tough career woman Rebecca (Lydia Leonard); the sympathetic and slightly clumsy Dan; old guard patrician Stella (Maggie Steed); and the controlling and self-deceiving Jonathan (Jack Davenport), who in this interpretation is the son of Richard Nightingale (Jim Broadbent), one of the agency’s founders.

There’s also Misha (Hiftu Quasem), the girl Jonathan is keeping a secret, who lands a job as Rebecca’s assistant at the start of the first episode. And the catnip factor of the original series remains: a plethora of big-name actors (Kelly MacDonald, Helena Bonham Carter, Dominic West, Phoebe Dynevor, David and Jessica Oyelowo among them) playing themselves into stories that touch on ageism, to stage fright, pay parity and the cost (for actresses) of having children.

So far so familiar. But after a first episode which closely follows the opening of the French series, the show’s plots gradually begin to differ and respond more closely to the specific concerns of the British cultural industry, with its closer ties to – and his concerns about – American partnerships. and influence.

Unlike the British cultural industry, and partly because of the language factor, Morton said: “The French entertainment and creative world does not feel secondary or indebted to Hollywood, and in fact famous it does not ‘is not. But if you’re British and you work in this industry, whatever you think, you feel like the mothership, the big factories, are there. Incorporating that into the show felt true.

After Richard’s unexpected death, Jonathan sells a majority share to a major US agency, which quickly sends an executive, Kirsten (Chelsey Crisp), to London to oversee Nightingale Hart. “She could be nice,” Dan said hopefully. “I met perfectly normal Americans.”

There’s plenty of humor through the clash of cultures, a perfect vehicle for Morton’s brand of dry humour, as the British team mutters ‘yes’, ‘no’ or ‘well’, while the Americans repeatedly tell them how excited they are about the new relationship.

The very British style of understatement and indirection that pervades the dialogue is a noticeable tonal difference from the French series. This is taken to a masterful height in the character of Julia (Rebecca Humphries), Jonathan’s assistant, who rarely utters more than “yes” or “no” but manages to infuse the words with a pent-up intensity that conveys her obsession with her boss.

“The French do everything with style, passion and articulation,” Davenport said. “And our characters have to be hyper-articulated, professionally. But personally, they are as inarticulate as the average Brit. We are not a culture that is encouraged to say what we think or feel.

Morton’s writing, said Puwanarajah, reveals how quickly the “characters’ legs paddle beneath the surface under ‘yes, yes, I mean, maybe, go on’. It’s funny and real and dissonant à la We all loved the French series, but strangely it never came on set with us because every scene was a John Morton scene.

Like the French series, the show uses its guest stars to evoke the realities and vulnerabilities of those who seem to perform best. When MacDonald’s real-life agent called to tell the actress her character had been told she was too old for a role, the agent “had a little trouble finding the right words,” MacDonald said. . “I realized it was a bit awkward for her to say that, just like on the show, which was quite funny.”

In an episode featuring married actors Jessica and David Oyelowo, the pertinent issue of pay equity and the complexities that come with it are touched upon: “Your market rate is higher,” Jonathan tells David; but “Jess gave me his life!” David responds — a line he suggested, he said in a joint video interview with his wife.

“It made me cry when I read the script,” Jessica said. “Because if you’re an actress and you have babies, you feel that career loss. It was good that they added those personal adjustments.

Playing yourself isn’t easy, David said humorously. “I tried to think of myself as a character, but every time someone said ‘David and Jess’ on set, my brain would short out. There was a time when the director asked me to play ‘him’ as more pathetic, and I thought to myself, is David Oyelowo pathetic, or is the character pathetic?” When Jessica said she found it easier to separate the real self and onscreen, her husband nodded, “He was never asked to be pathetic,” he said.

The show gives time to these issues in the cultural workplace, but Morton said that was not its primary intention. “The French did something that I admire them for, something kinder and more nuanced, which I hope we captured,” he said. “There’s a kind of dysfunctional family here that we care about.”

As Simon (Tim McInnerny), an aging actor and alcoholic, tells a politely smiling Bonham Carter, “As tragic as one’s own life may seem, it ends up being funny.”