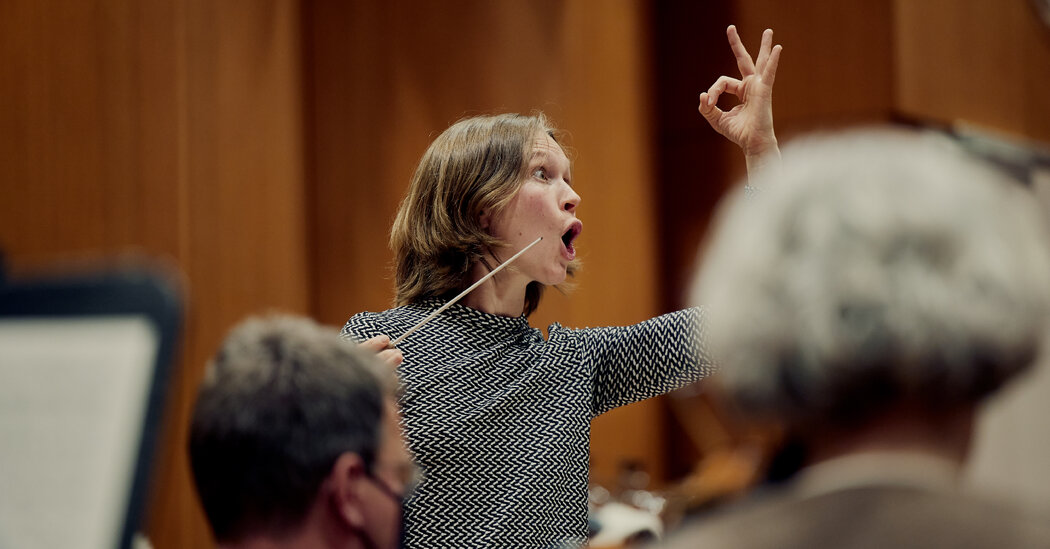 A conductor in demand and in control

MUNICH — Let’s put that aside: don’t expect Mirga Gražinytė-Tyla to be the musical director of a major American orchestra anytime soon.

“For now, I’ll be much happier just being a freelancer,” Gražinytė-Tyla, 35, said in a recent interview at the Bavarian State Opera here, where she was preparing a new production of ” The Cunning Little Vixen” by Janacek. .”

It’s an unusual statement coming from a sought-after young conductor, particularly one whose current appointment – as Music Director of the City of Birmingham Symphony Orchestra in Britain – ends this spring. Even more unusual since Gražinytė-Tyla, along with the likes of Susanna Mälkki, is often mentioned as one of the main candidates to fill the vacancies on the horizon in the best American orchestras, including the New York Philharmonic.

But as administrators search for a conductor of his stature, as well as someone to tip the scales of the gender balance in the United States – where there will be no female musical directors among 25 greatest orchestras in the country until Nathalie Stutzmann starts with the Atlanta Symphony Orchestra next season — Gražinytė-Tyla is a defiant rarity: an anti-career who resisted industry pressure for the artistic and personal development.

Her star may be on the rise, but she’s got it on a leash. Gražinytė-Tyla has designed his schedule this season to be dominated by “The Cunning Little Vixen” – both live, as in Birmingham, and staged, as in Munich. She has maintained remarkable control over her schedule, securing time for her family: her partner and two sons in Salzburg, Austria, with a third child on the way. (The Birmingham Orchestra recently announced that due to her pregnancy, she would no longer be conducting her final concerts scheduled for June.)

“She’s very in tune with herself,” said Barrie Kosky, who directed the new “Vixen,” which runs until February 15. “She is very sure that her decisions are the right decisions for her. She doesn’t care about all the tra-la-la.

Coming from a family of professional musicians in Lithuania, and enjoying early success with the drumstick, Gražinytė-Tyla (pronounced grah-zhin-EE-tay teel-AH) was trained for the typical life of a conductor. orchestra: jet-set bustle and springboard nominations – leading, perhaps, to a prestigious podium.

But she has also long had a streak of independence. She began studying music formally at age 11 against the wishes of her parents, who wanted to spare her the hardships of an artistic life. Although experienced as a singer, she was not a trained instrumentalist, so she joined the only school program available: conducting. She was a natural and, at 16, won first prize in a Lithuanian competition.

“I remember thinking, Oh no, what am I going to do now?” said Gražinytė-Tyla. “There was this pressure, and I knew it would be so difficult to maintain this level. It was a huge challenge, but also a mixture of joy and responsibility.

The pressure didn’t stop there. After completing her studies, adding Tyla (the Lithuanian word for silence) to her professional name and winning the Salzburg Young Conductors Award, she then received a scholarship from the Los Angeles Philharmonic Orchestra, where she later served as an assistant, then partner, conductor. She first appeared with the CBSO in the summer of 2015, and by the following January had been named its musical director.

The speed of it all, Gražinytė-Tyla said, “gets you in shape and can give you a good kick to do something fast.” But, she added, it also made her appreciate an introspective break. “I think it’s extremely important to stay very aware of what’s going on inside, because a person shouldn’t be a machine, and shouldn’t be a small part of this big mechanism that says, ‘You go this way and this way.’”

“People are different,” she continued. “But I think I need time where I’m not studying, directing, traveling or rehearsing to just be a full human being.”

A breakthrough came during a conversation with violinist Gidon Kremer. She remembers him telling her that her career would always feel like it had two different doors. Behind one would be record labels, managers, festivals and a variety of conflicting demands; behind the other, “all your dreams are there, and your imagination, and the things you can seek out and explore.”

She opened both doors. Insistently private, she speaks strategically, sometimes even euphemistically, about her home life. Her partner has not been publicly identified beyond having a job with the Mozarteum Orchestra in Salzburg; in the interview, she referred to family time as “connecting.”

Still, she took the job in Birmingham, which enjoys high profile and a star-making reputation, with recent music directors such as Simon Rattle and Andris Nelsons. A recording contract with Deutsche Grammophon followed his appointment. Either way, she was a first: as a woman on the Birmingham podium and as a woman conductor with that legendary label. These milestones were publicly noted, Gražinytė-Tyla said, but only in passing.

“It’s something our generation should be incredibly grateful for,” she said, referring to the struggles of female conductors. “There have been a lot of painful memories for our colleagues in the past, and I myself have had a few small experiences, but nothing like what someone of Susanna Mälkki’s generation had to go through.” (Mälkki is 52 years old.)

Gražinytė-Tyla was warmly welcomed by the Birmingham musicians, said Oliver Janes, the ensemble’s clarinetist. “She has this repeat technique where you forget you’ve ever played a piece before,” he added. “And once you completely forget how it happens, you feel like you’re starting over again.”

It too, he says, gave the orchestra – and its audience – a jolt. On their first appearance at the BBC Proms under her direction, they followed up with Tchaikovsky’s ‘Sleeping Beauty’, and as it ended she was shouting to the audience inside the sprawling Royal Albert Hall in London, “See you in Birmingham!”

She released several Deutsche Grammophon recordings with the orchestra, including as part of a landmark duo of symphonies by often-overlooked Mieczyslaw Weinberg — a reflection, she said, of her tendency to adopt a project-based approach to conducting. Just as there will be more Weinbergs to come, she is in the midst of a “Vixen” immersion.

“I’m fully aware that it’s complete luxury,” she said. “Some people see the conductor’s job as follows: you have to be incredibly fast and know all the repertoire. These are fantastic qualities. On the other hand, for my part, I can only say that I believe less and less that I can be such a type of conductor.

Over time and multiple performances, she added, “Vixen” revealed her “incredible jewelry and connections” to her. Janes, the clarinetist, said that in Birmingham she knew every corner of the text, to the point that, “if all the singers got sick, she could do the whole gig and sing every part”.

When Kosky began planning the Munich production with Gražinytė-Tyla, he said, she wanted their first conversation to be about the text, “which thrilled me from the top of my head to my toes”.

“I told him, ‘It’s all work,” he added. “The work itself is how the text is propelled by the music. She breathes the text, and she breathes with the music. Without that in Janacek, you’re dead.

The text was central even during his recent rehearsals with the Bavarian State Opera Orchestra. Standing on the podium, her small stature concealing a deep voice that commands as easily as she lets out a thunderous laugh, she alternated between single notes and scenes explaining in detail – particularly in regards to the direction of Kosky. She later did the same when the cast joined for the sitzprobe, the first meeting of singers and instrumentalists.

Tenor Jonas Hacker, singing the role of the schoolmaster, said Gražinytė-Tyla’s directions tend to be “very colour-driven” and that she “breaks things down into tiny segments”, which, he added, comes from the score itself: “Janacek tends to be so fragmented that she just takes a few bars and really finds out what the text says and what its mood is, and really takes the time. “

Throughout, Kosky said, he remained convinced that she is “a theater person, which to me is so fundamental.”

“There aren’t many opera conductors in the world,” he added. “You can be a great symphony conductor and be a bad opera conductor. And there is an absolute shortage of truly talented opera conductors. It’s a little worrying; take out your truffle pig right now. But Mirga is one of them.

Gražinytė-Tyla hasn’t announced any future performances beyond a brief revival of “Vixen” at the Munich Opera Festival this summer. But for now, she’s confident that what follows won’t be a long-term position with an orchestra.

“The luxury of focusing on the ‘Vixen’ – I think that will remain a very important point for me to process certain repertoires in the rhythm that seems to me to be the right one, at the moment, for me”, she said. said, adding with a good-hearted laugh, “I’m not sure the big bands will be interested in having me if I say I’ll just do ‘Vixen’ for the whole season.”